Suvendu Adhikari, a former protégé and close confidante of TMC supremo and CM Mamata Banerjee, will take on the latter head-on in Nandigram 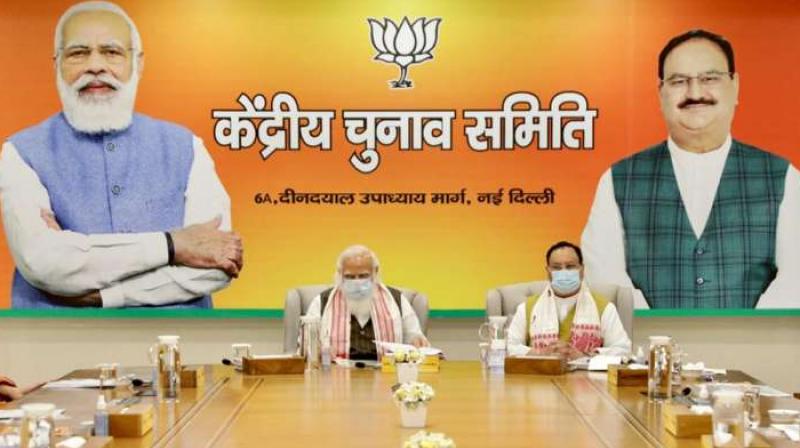 The first list of 57 names, which came a day ahead of Prime Minister Narendra Modi’s first election rally in the state, also has names of former Indian cricketer Ashoke Dinda and ex-IPS officer Bharati Ghosh. (Twitter)

New Delhi: The BJP on Saturday released its much-awaited first list of candidates for West Bengal Assembly polls, making it official that Suvendu Adhikari, a former protégé and close confidante of TMC supremo and chief minister Mamata Banerjee, will take on the latter head-on in Nandigram.

The electoral battle between Ms Banerjee and Mr Adhikari is being touted as the “Battle Royale” as the CM has left her Bhawanipur seat which she had been representing for the last two terms. Nandigram, in East Mednipur, is considered the home-turf of the Adhikaris’ and is credited for bringing the TMC to power in 2011 and ousting the Left from the state after 30 years of its rule.

The first list of 57 names, which came a day ahead of Prime Minister Narendra Modi’s first election rally in the state at the Brigade Ground since the model code of conduct was imposed, also has names of former Indian cricketer Ashoke Dinda and ex-IPS officer Bharati Ghosh. One seat, Baghmundi, has been given to BJP ally AJSU.

Mr Modi’s public rally s being held on the culmination of BJP’s ‘Parivartan Yatra’ and the PM is expected to speak on the BJP’s vision of “Asol Poribortan” and how it will make the state “Sonar Bangla”.

The BJP has gone all out to make this “mega rally” a show of strength and is hoping that at least 10 lakh people will attend the rally.

With its first list the BJP has announced candidates for all but three of the 60 seats which will go to polls in the first two of the eight-phase elections to be held between March 27 and April 29.

"Jungle raj prevails in the state, and voters have made up their mind to oust the Trinamool Congress (TMC) and elect the BJP to power,” claimed BJP general secretary Arun Singh, who announced the names of candidates.

After the list was announced, BJP’s IT cell head Amit Malviya tweeted: “Mamata Banerjee will soon join the inglorious list of incumbent chief ministers to lose their own elections…”