According to the government, it has flown more than 13,000 students back home safely from Ukraine so far 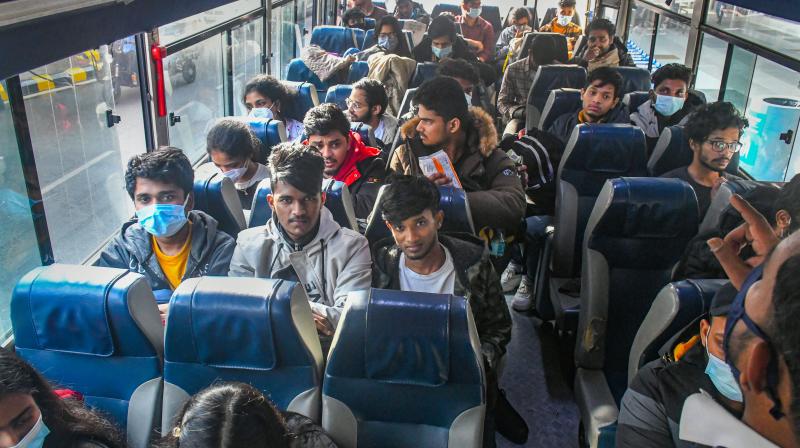 Indian students who were stranded in Ukraine amid Russia-Ukraine conflict, arrive at the IGI Airport in New Delhi, Sunday, March 6, 2022. (PTI Photo)

Mumbai: Prime Minister Narendra Modi has attributed the evacuation of Indian students from the war-hit Ukraine to ‘India’s growing influence in the world.’

“While other countries faced difficulties to rescue its citizens, we were able to carry out the evacuation. This proves the increasing influence of India in the world,” Mr Modi said on Sunday while speaking at the Golden Jubilee programme of the Symbiosis University in Pune.

The Centre has launched ‘Operation Ganga,’ under which special flights were arranged to evacuate citizens stranded in Ukraine, which has been attacked by Russia. According to the government, it has flown more than 13,000 students back home safely from Ukraine so far.

“We are evacuating thousands of Indians safely from the war zone through Operation Ganga,” said Mr Modi.

The PM also inaugurated a metro project in Pune, a foundation stone of which was laid by him only on December 24, 2016. Before inaugurating the metro service, he unveiled a statue of Chhatrapati Shivaji Maharaj in the premises of Pune civic body.

However, the NCP and the Congress alleged that the project has been incomplete. Pune NCP president Prashant Jagtap said that Mr Modi was inaugurating the metro rail project which was incomplete, whereas Pune city Congress unit president Ramesh Bagwe said that the PM was cheating the people of Pune by inaugurating incomplete projects.

NCP chief Sharad Pawar on Saturday had said the work of the metro rail service to be inaugurated by the PM was incomplete.

The NCP and Congress workers also staged protests against Mr Modi for ‘insulting’ Maharashtra. They came out on roads carrying black flags and placards, with ‘Go Back Modi’ written on them across the city.

“Modi had in Parliament insulted Maharashtra by suggesting that the state had encouraged the spread of Covid-19 to other states. We demand an apology from PM Modi, or else he should go back,” said Mr Bagwe.