India   All India  07 Apr 2020  Amid lockdown, children beg for survival
India, All India

Amid lockdown, children beg for survival

As per estimates, there are around 30,000 beggars in Hyderabad. 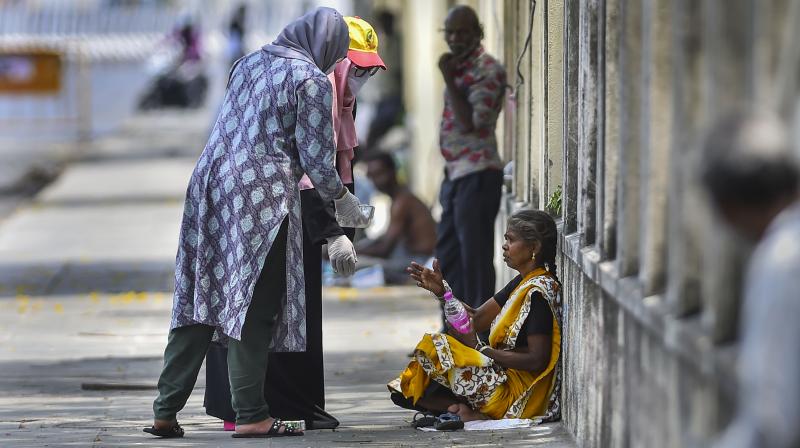 Hyderabad: Each time Kajal and Sakina spot a vehicle slowing down, they blindly start running towards it, holding hands gently, hoping someone driving by will care to slow down a bit and give them some food. Under a blazing hot sun, the two girls — aged four and five years — run barefoot throughout the day near a traffic junction.

Sadly, they may not be the only children one can find out on streets of twin cities during the lockdown, when most parents are scared to let their children go out of their homes.

Without a mask or sanitiser to ward off the killer coronavirus, oblivious to all scares save impending hunger, several children who used to assist their parents selling a variety of items or doing other odd jobs at traffic signals, have now taken to begging for survival.

Since the lockdown, with few people on roads and nothing to sell, about 25 of them, including beggars and vagabonds, have been temporarily put up in an open ground adjacent to Gymkhana cricket stadium in Secunderabad.

“My father used to earn about `300 per day by selling balloons and other fancy eye-catchy items at traffic signals. Several cars used to stop at the signal. If lucky, selling all day, we sometimes would make even `500 a day. We would have a decent meal and sleep under the flyover. Now, there is no other option but to beg. There are few people on roads. The good thing is some people are still giving us food,” Sakina told Deccan Chronicle.

For street children, it is a matter of daily survival that trumps all other risks.  “I came to Hyderabad six months ago from Anantapur in search of livelihood. I started to sell toys and other items. When lockdown began, I wanted to take my family back to my native but by then, train and bus services had been suspended. Now, all of us have taken to begging,” says Ramu, whose children Sai and Nandu, aged six and three, have taken to begging alongside the parents.

“All sorts of people live in this ground,” says Sai, pointing towards some persons, who are possibly junk addicts. Even minor girls are vulnerable, he says.

Ask Kajal if she knows what coronavirus is, she draws a blank. After a pause, she says she has heard of it. Her father says whatever little they know about the virus is through policemen posted nearby.

A few feet away was Begum, who was trying to feed her one-and-a-half year old child. “Luckily, we are getting food every day. Some people give us food packets. We do not know how long food will come, so we are saving some food packets. We eat only when very hungry. We used to sleep under the flyover, but now we are in the open ground under the sun,” she says.

Interestingly, all of them lit up some object or the other, mostly by gathering garbage on Sunday night, in response to Prime Minister Narendra Modi’s call to light a diya. “Policemen came and told us about lighting a candle. Since we had nothing else, we gathered garbage and burnt it,” said little Nandu.

A drive across Hyderabad will find you run into many people, mostly beggars or vagabonds, making bus shelters or footpaths their homes – nowhere to go.

As per estimates, there are around 30,000 beggars in Hyderabad. This number is likely to go up what with lockdown snatching away even the paltry sums of money those at traffic signals used to make by selling all kind of wares.
Experts at the Indian Institute of Economics say begging has gone up because of unemployment, immigration from rural areas, and acute poverty; all of which will only increase during the lockdown. With no candles or diyas to light up their dark lives.