Night patrolling by forces in J&K to stop targeted killings

In past three weeks, half a dozen seasonal labourers from Bihar and UP and an equal number of local residents were shot at by gunmen 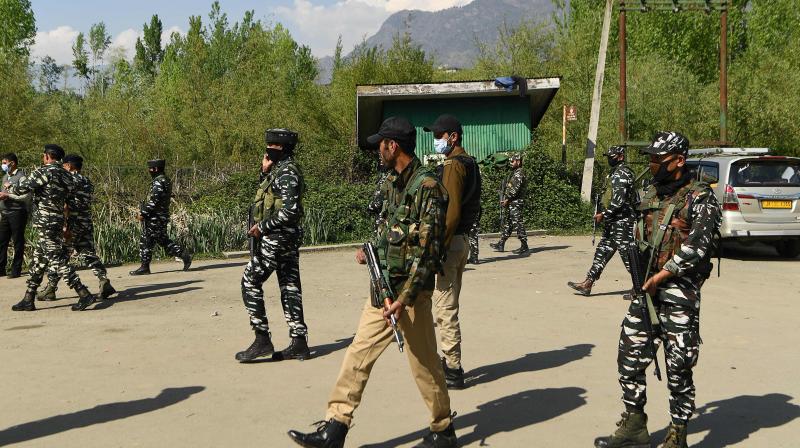 Forces guard near a tempo vehicle following a suspected cylinder blast at a car parking outside the Tulip garden in Srinagar on April 6, 2022. (TAUSEEF MUSTAFA / AFP)

Srinagar: In view of persistent targeted attacks by suspected militants, the Jammu and Kashmir police and various other security forces have begun night patrolling in many remote villages and intensified the same in militancy-infested areas of mainly the Kashmir Valley.

In past three weeks, half a dozen seasonal labourers from Bihar and Uttar Pradesh and an equal number of local residents including a Kashmiri Pandit were shot at by gunmen in different parts of the southern and central districts of the Valley. A few of them including two Muslim village heads later succumbed to their injuries. Separately, a Central Reserve Police Force (CRPF) jawan was killed and another wounded in a sneak militant attack in the congested Maisuma area of capital Srinagar. These incidents are reminiscent of similar attacks on both Hindu and Muslim seasonal labourers from Bihar, UP, West Bengal and some other states that were carried out by gunmen in different parts of the Valley including Srinagar in October last year leading to a vast majority of such work force leaving Kashmir prematurely.

In New Delhi, Union Minister of State for Home, Nityanand Rai, told Rajya Sabha that four Kashmiri Pandits were among 14 Hindus killed by militants in J&K since August 2019 following the abrogation of Article 370 whereas a total of 34 people belonging to minority communities were slain by them in the last five years. He also said that as many as 87 civilians and 99 security personnel have been killed in J&K since August 5, 2019 when the erstwhile state was stripped of its special status and split up into two Union territories.

Inspector General of Police (Kashmir range], Vijay Kumar, while speaking to a selected group of reporters here on Wednesday said that the J&K police along with the security forces has intensified the night patrolling in remote Kashmir villages mainly where Kashmiri Pandits live and non-local labourers work “to prevent terrorists from attacking soft targets.”

He, however, claimed that the assailants involved in targeting non-local labourers and a Kashmiri Pandit chemist in Pulwama and Shopian districts in the past week have been identified and would be brought to justice soon. He also said that two militants killed in a gunfight with the security forces in Pulwama’s Tral area earlier during the day on Wednesday had apart from being involved in other terror acts killed Sarpanch Sameer Ahmed in Khonmoh area of Srinagar district recently.

The deputy commissioners of Srinagar, Anantnag, Budgam and Kupwara districts in the Kashmir Valley and Doda district in Jammu region have while asking the business establishments to install CCTVs said that the orders shall remain in force for sixty days “unless withdrawn earlier and subject to further extension or modification.” The identical orders read “Any contravention of this order shall attract legal consequences as are contemplated under section 188 of the Indian Penal Code 1860.” Under this law, a person can be punished with simple imprisonment for a term which may extend to one month or with fine which may extend to ₹ 200, or with both.

The DCs have in their orders said that, in view of the increased incidence of selective targeting of the innocent citizens in J&K by “anti-nationals and subversive elements”, several measures including the use of appropriate technologies are required to be taken “to safeguard the life and property”. They further said that the installation of CCTVs would not only help in controlling crime but will also help in flourishing of business, tourism and overall growth of the society by preventing danger to human life and safety.

“In order to deter criminals, anti-social and anti-national elements from committing crimes, the installation of CCTV outside such establishments would work as a force multiplier, which would inspire further confidence in general public/customers visiting these establishments”, reads the order issued by Srinagar DC Mohammad Aijaz.