India   All India  07 May 2019  Digvijaya Singh performs yagna with Computer Baba to ensure win in LS elections
India, All India

Digvijay Singh will be up against BJP's MP candidate and firebrand leader Sadhvi Pragya in the Lok Sabha elections. 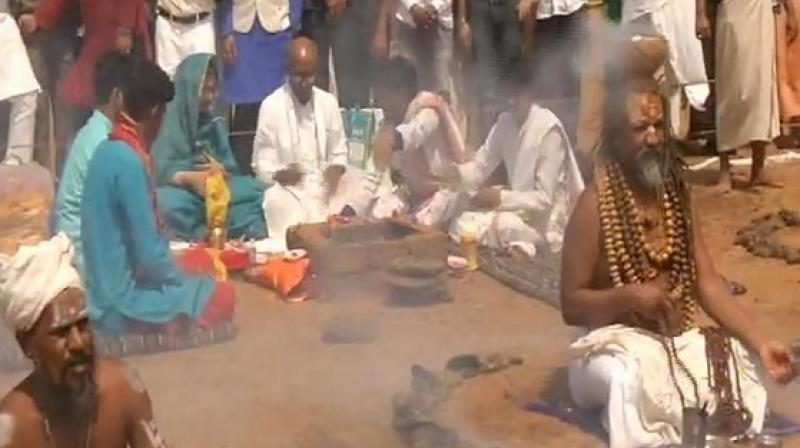 At the 'pooja' Digvijaya is seen dressed in white kurta pyjama seated on the ground while others surround him in a semi circle. (Photo: ANI)

Bhopal: Congress leader and former Madhya Pradesh Chief Minister Digvijaya Singh on Tuesday performed a 'havan' in the presence of Namdas Tyagi also known as Computer Baba and other sadhus at a Maha Yagna organised in Bhopal on Tuesday.

Tyagi said that the Yagna was a form of 'Hath Yoga' to ensure Digvijaya's win in the Lok Sabha elections and added that BJP had "fooled" the community of seers by using the Ram Mandir issue as a political tool.

"BJP has fooled not just the public but the community of seers as well. All sadhus who are with me unanimously say that without a Ram Mandir there will not be a Modi government again, we are holding the Yagna to ensure Digvijay Singh's win," Tyagi said here.

Namdas Tyagi or 'Computer Baba' was appointed the Minister of State (MoS) position under the Shivraj Singh Chouhan government. However, he had openly rebelled against the Bharatiya Janata Party (BJP) after being denied the party ticket for the state assembly elections held in Madhya Pradesh.

At the 'pooja' Digvijaya is seen dressed in white kurta pyjama seated on the ground while others surround him in a semi circle.

Digvijay Singh will be up against BJP's MP candidate and firebrand leader Sadhvi Pragya in the Lok Sabha elections.

Bhopal is going to polls in the sixth phase of parliamentary elections on May 12. The counting of votes will begin on May 23.