India   All India  07 May 2020  Vizag's morning of horror: Gas leak leaves people falling like leaves in the street
India, All India

Gas leak from chemical company on the outskirts of Vizag kills 8; thousands in hospital 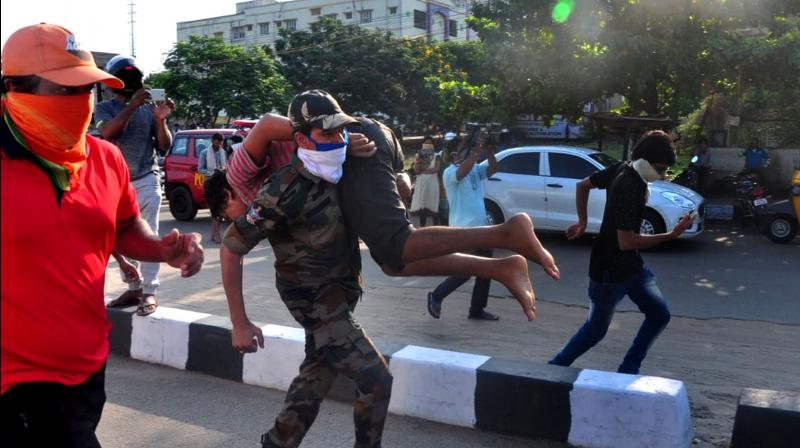 A gas-affected person is carried to hospital in the port city of Visakhapatnam in Andhra Pradesh. A gas leak from the LG Polymer chemical company killed at least five people and put more than 1000 in hospital early Thursday morning, May 7, 2020. (A Photo: P Narasimha Murthy)

Visakhapatnam: In a morning of horror in this port city in Andhra Pradesh, at least five people died and more than 1,000 have been hospitalised after a deadly gas, thought to be styrene, escaped from two tanks at a chemical plant.

Officials of the Greater Vizag Municipal Corporation (GVMC) issued a public alert warning people to stay home and cover their noses and eyes with a wet cloth. They said the death toll will likely rise.

A local police officer said, as reported by AFP, that the gas leak took place from two 5,000-tonne tanks that had been left unattended due to the coronavirus lockdown since late March

B K Naik, a hospital coordinator, said at least 1,000 people had been sent to different hospitals. It was feared many others may be unconscious in their homes as it was still early morning when the gas leak took place.

"We authorities are checking (in houses) as well. We are working to get people to hospital. They need oxygenation and fresh air," AFP quoted him as saying.

The plant operated by LG Polymers is located on the outskirts of Visakhapatnam, an urban agglomeration of five million.

Swaroopa Rani said the gas leak was due to a chemical reaction that produced heat in the two tanks. She said local villagers raised the alarm around 3:30 am, saying there was a smell of some gas in the air.

"We reached there immediately. One could feel the gas in the air and it was not possible for any of us to stay there for more than a few minutes," AFP quoted Swaroopa Rani as saying.

The incident led to panic among locals in a radius of 3 km around the plant with many people seen lying unconscious on the roads. Others were having breathing problems and complained of rashes on their body and sore eyes.

Local reports said people rushed over to the Meghadrigadda water reservoir to wash themselves. TV footage showed people slumped on the pavements. Motorbikes were left in the middle of the roads as though people had just fallen off them.

India witnessed in December 1984 one of the worst industrial disasters in history when gas leaked from a pesticide plant in Bhopal.

The GVMC said its officials are trying to reduce the impact of the gas leak by spraying water, and public address systems are being used to ask people to use masks.

Chief minister Y S Jagan Mohan Reddy has asked district officials to take every possible step to save lives and bring the situation under control.

LG Polymers is a South Korean company that makes polystyrene and expandable polystyrene, a versatile plastic used to make a wide variety of consumer products like toys and appliances. It has been in operation since 1961.

Former director of Homi Bhabha Cancer Hospital and Research Centre Dr D Raghunatha Rao said styrene is primarily used in the production of polystyrene plastics and resins. If exposed to the gas, it results in mucous membrane and eye irritation, and gastrointestinal effects.

Human studies have been inconclusive on the reproductive and developmental
effects of styrene; several studies did not report an increase in developmental effects in women who worked in the plastics industry, while an increased frequency of spontaneous abortions and decreased frequency of births were reported in another study.  Several epidemiologic studies suggest there may be an association between styrene exposure and an increased risk of leukemia and lymphoma.

However, the evidence is inconclusive due to confounding factors.