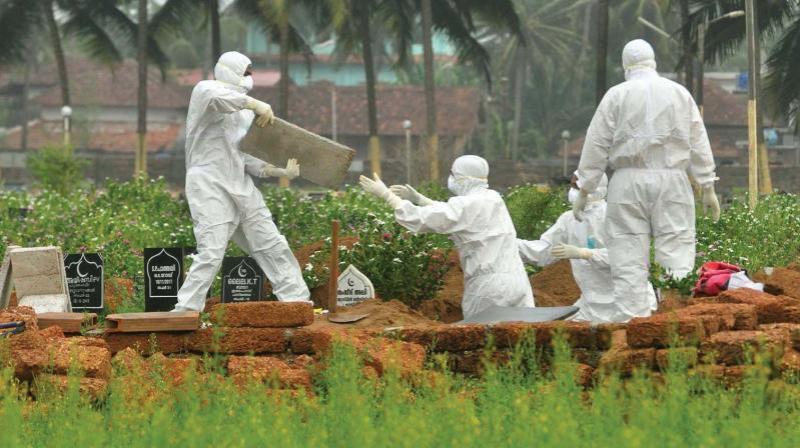 Kerala Health Minister K K Shylaja Teacher has lauded the role of doctors and their quick response and efforts in handling the cases. (Photo: Venugopal)

Kozhikode: In a sense of relief, two samples which initially tested positive for Nipah virus in Kerala have now been tested negative, state health officials said on Thursday. The development comes days after the deadly Nipah outbreak claimed 17 lives in Kozhikode and Malappuram districts of Kerala.

The state government on Tuesday had updated the toll to 17 after including the death of Mohammed Sabith, the first victim, whose samples had not been tested for Nipah.

Kozhikode Additional District Medical Officer Asha Devi said, "Of the 18 confirmed cases, 16 people died and two have survived. They have tested negative after days of critical care. But they will be under observation for at least 21 days.”

Among the two who have tested negative is a 19-year-old nursing student who was interning at the Medical College when the first Nipah patient was brought in the beginning of May, a report in NDTV said.

Kerala Health Minister K K Shylaja Teacher has lauded the role of doctors and their quick response and efforts in handling the cases.

"It's because of so many health officials, doctors, nurses and support staff, who tirelessly worked day and night, that we have been able to contain the outbreak so swiftly. This is unprecedented when compared to the outbreaks seen across the world. Be it private hospitals or government, or the state and central governments -- all worked as a team," NDTV quoted Shylaja as saying.

Health officials also went beyond their call of duty to help families.

With close relatives staying away due to fear of contracting Nipah, Dr R S Gopakumar, Health Officer of Kozhikode corporation, took the responsibility of handling 12 bodies, whose final journey was supervised by him.

"I was saddened that during his last journey there were none of his dear ones to perform last rites. I did not have to think twice and I decided to perform all Hindu rites for the boy as I wanted him to go on his final journey with all the dignity. It was my duty...," Gopakumar said.

After relatives of a 53-year-old man, who died of Nipah, informed him that they were not participating in the funeral, he conducted the final rites for him too. Another last journey which tugged his heart was when he assisted the husband of a 19-year-old woman. The woman, who had allegedly consumed poison, had been brought to a hospital here from Karnataka when some persons who were later found to be positive for Nipah, were treated near her bed. However, the woman's samples were found to be negative later.

Dr Anoop Kumar and his team from Baby Memorial Hospital also played a significant role in the early diagnosis of Nipah, sample testing and alerting the government.

"We got the first patient on May 17 and he was in critical care for encephalitis. But he wasn't responding well to the treatment. He mentioned that his brother had died a few days ago. He also said that three of his family members had a fever. We urgently called them to the hospital. Their condition worsened by evening. We sent their samples for testing. The next morning, our team of doctors suspected it to be Nipah based on the literature available and their symptoms. However, the man died that afternoon. Later, the lab reports confirmed Nipah," 40-year-old Dr Anoop Kumar told NDTV.

However, the carrier for the virus in Kozhikode remains unidentified.