Of the 25 Lok Sabha seats in the state, the BJP won 24 and its alliance partner Rashtriya Loktantrik Party won one. 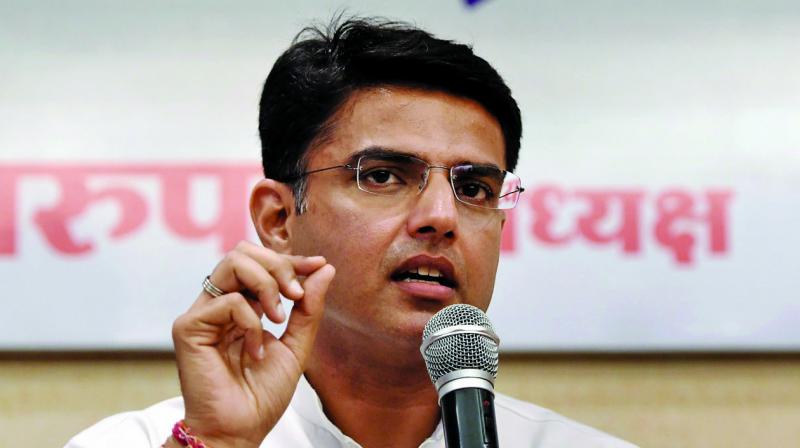 New Delhi: Amid a bitter turf war in Rajasthan Congress unit after the stunning defeat in Lok Sabha election, the Congress central leadership on Thursday sought a report before June 11 from state PCC chief and seputy chief minister Sachin Pilot.

AICC General Secretary in-charge of Rajasthan Avinash Pande asked Mr Pilot to submit in an excel sheet format booth-level reports of each Assembly constituency. He also asked the PCC chief to ensure that reports are sent by Zila Congress Committees as well as each Lok Sabha candidate to the AICC.

In a separate letter to the Congress workers in Rajasthan, Mr Pande asked them to desist from harming the party’s image post the disastrous performance in the general elections and urged them to maintain discipline in the current “tough times”.

The Congress party which succesfully wrested power from the Vasundhara Raje-led BJP government in Rajasthan barely five months ago, failed to win even a single seat in last month’s Lok Sabha polls. Of the 25 Lok Sabha seats in the state, the BJP won 24 and its alliance partner Rashtriya Loktantrik Party won one.

Days after the Congress had suffered a complete rout in the Lok Sabha elections, the infighting within the party’s state unit had intensified further on Monday when Rajasthan Chief Minister Ashok Gehlot had blamed his deputy Mr Pilot for his son’s defeat from Jodhpur.

“Mr Pilot had said a few days ago as well that we would win the Jodhpur seat with a handsome margin, that we have six MLAs there and that we had run a great campaign, so I think that at least he (Mr Pilot) should take the responsibility of this seat…on the Jodhpur seat, its post-mortem should be done on why we didn’t win,” Mr Gehlot had said in an interview.

Though Mr Pilot had expressed surprise at Mr Gehlot’s statement, he had refused to comment further.

However, a day later, Todabhim MLA Prithviraj Meena said the chief minister should bear the responsibility for the election drubbing.

“A chief minister is responsible for an election defeat when the party is in power and when it is in the opposition, the responsibility lies with the party president,” he said.

The MLA, however, said it was his individual opinion that Pilot should be made the CM.

Congress General Secretary in-charge of the state Mr Pande in the note on Thursday said: “History is witness that even 10 disciplined people in an organisation can take on thousands of people and are succesful in maintaining the core of the party,”

He urged leaders not to make any statement to the media or in the social media which can harm the image of the party or gives an impression of people angling for personal gains.

The Congress Party is in the throes of a churning following its performance in the Lok Sabha polls in which it had expected to at least triple its 2014 tally of 44 seats.

The most unexpected was the complete defeat of the party in the three Hindi heartland states of Madhya Pradesh, Chattisgarh and Rajasthan which it has won in December.