India   All India  07 Jun 2019  Four militants shot dead in J&K two among them fled from police service
India, All India

The area is witnessing clashes between irate mobs and security forces amid fresh tensions set off by the killing of militants. 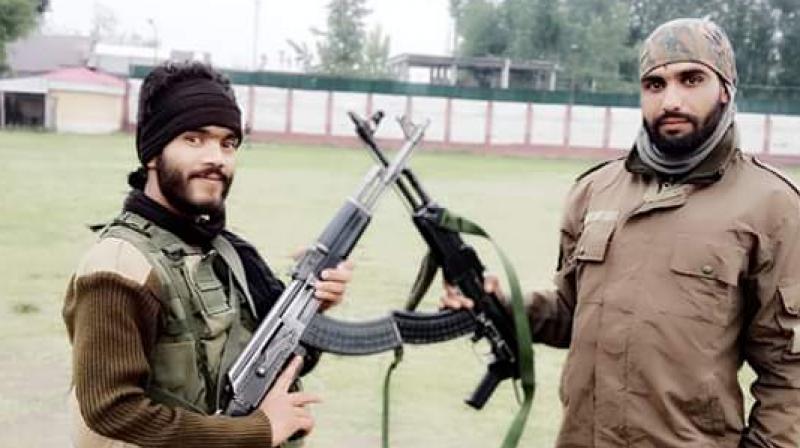 Policemen who were killed a day after they deserted their unit to join militants' ranks in J&K' s Pulwama. (Photo: File)

Srinagar: Two Special Police Officers (SPOs) affiliated with Jammu and Kashmir police's counterinsurgency Special Operations Group (SOG)  who had signed up for militancy just a day ago after fleeing their unit along with their service weapons were among four militants killed in a gunfight with security forces in the restive State' southern  Pulwama district.

The SPOs identified as Shabir Ahmed and Salman Ahmed, residents of Pulwama’s Tujan village and neighbouring Shopian district’s Uthmula village, respectively, went missing along with their service rifles and ammunition from the district police lines of volatile Pulwama on Wednesday night.

The firefight broke out in Pulwama's Panjara village on Thursday afternoon after the Army's 44 Rashtriya Rifles along with the SOG and Central Reserve Police Force (CRPF) launched a cordon-and-search operation on the basis of inputs about the presence of militants in the village.

The police said that one of the militants hiding in the village was killed in the initial exchange of fire adding that three others were 'neutralised' early Friday. The police, however, said that the searches in the area were still going on.

The other two slain militants have been identified as Irfan Ahmed Bhat and Ashique Hussain Ganai-both local Kashmiris.

The area is witnessing clashes between irate mobs and security forces amid fresh tensions set off by the killing of militants.