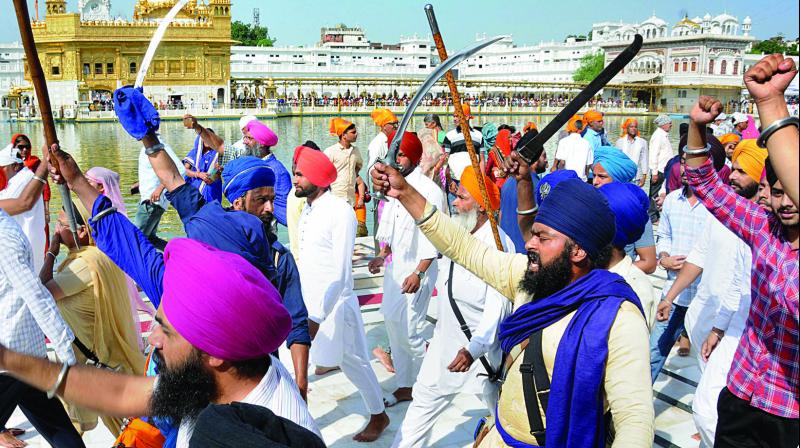 Members of various radical Sikh organisations shout pro-Khalistan slogans and brandish swords at a demonstration marking the 35th anniversary of the Operation Blue Star, 1984, at Golden Temple in Amritsar on Thursday. (Photo: PTI)

Chandigarh: An altercation between the pro-Khalistan supporters and the police saw brandishing of swords and tossing of turbans on Thursday at the Golden Temple complex. Violence erupted at a ceremony being held to mark the 35th anniversary of the Operation Bluestar.

Police personnel present inside the shrine complex in plain clothes controlled the situation from getting out of hand. However, ACP J.S. Walia and his team were seen with folded hands requesting the Sikh activists to maintain peace. While raising secessionist slogans, they broke the police cordon and clashed with open swords.

The altercation started  when Akal Takht acting Jathedar Giani Harpreet Singh delivered the customary public address from the podium of the Akal Takht. As he finished the address, authorities played kirtan on the speakers. The address supposed to be delivered by parallel Jathedar Dhyan Singh Mand got interrupted which resulted in tempers running high. A clash ensued between radical Sikhs and the SGPC task force. The incident took place about 100 feet from the sanctum sanctorum. The Sikh activists tried to break the barricades that were fixed right in front of the Akal Takht.

The Shiromani Gurdwara Parbandhak Committee’s (SGPC) is the apex body that manages Sikh shrines in India.

Markets around the Golden Temple remained closed for several hours.

Later in the afternoon, the shops around the temple and in the main markets started reopening.

The partial bandh was observed in the city on a call given by radical Sikh outfit Dal Khalsa on the anniversary of the military operation carried out in 1984 to flush out heavily-armed terrorists holed up in the temple complex.

Policemen in civil clothes were deployed along with the SGPC task force to thwart any attempt to disturb law and order.

There was heavy barricading around the Akal Takht in the premises of the Golden Temple to prevent any untoward incident. More than 3,000 security were deployed to maintain law and order.