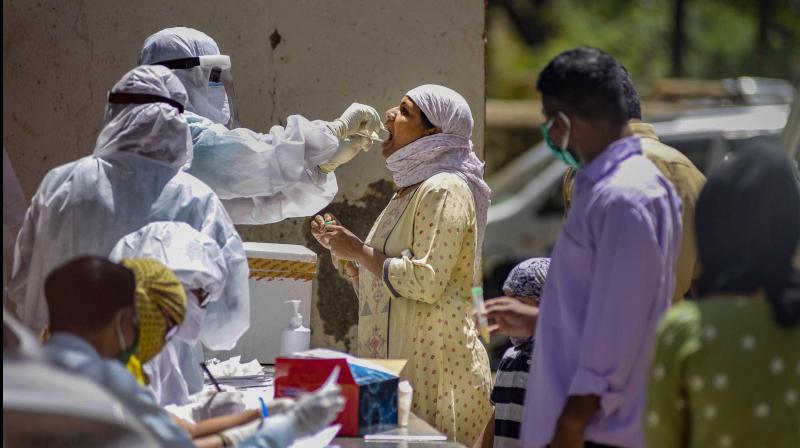 New Delhi: India registered its highest single-day spike of COVID-19 cases for the fifth consecutive day on Sunday, with 9,971 new infections taking the country's tally to 2,46,628, while the death toll rose to 6,929, according to the Union Health Ministry.

India had raced past Spain on Saturday to become the fifth worst-hit nation by the COVID-19 pandemic. Now, only the US, Brazil, Russia and the UK are ahead of it.

Spain so far has recorded 2,41,310 cases, according to the university data.

India registered 287 deaths in the last 24 hours since Saturday morning.

The number of active COVID-19 cases stands at 1,20,406, according to the Health Ministry.

A total of 1,19,292 people have recovered and one patient has migrated, the Ministry said.

"Thus, around 48.36 per cent patients have recovered so far," a senior ministry official said.

Of the 287 deaths reported since Saturday morning, 120 were from Maharashtra, 53 from Delhi, 29 from Gujarat, 19 from Tamil Nadu, 17 from West Bengal, 15 from Madhya Pradesh, 13 from Rajasthan, 10 from Telangana, three from Jammu and Kashmir, two each from Karnataka, Punjab and Chhattisgarh and one each from Kerala and Bihar.

The death toll reached 59 in Karnataka and 50 in Punjab.

Jammu and Kashmir has reported 39 fatalities due to the disease, Bihar has 30, Haryana has 24 deaths, Kerala has 15, Uttarakhand has 11, Odisha has eight and Jharkhand has reported seven deaths so far.

Himachal Pradesh and Chandigarh have registered five COVID-19 fatalities each. Assam and Chhattisgarh have recorded four deaths each.

Meghalaya and Ladakh have reported one COVID-19 fatality each, according to the ministry data.

According to the ministry's website, more than 70 per cent of the deaths are due to comorbidities.

Punjab has reported 2,515 coronavirus infections so far, while Assam has 2,397 cases. A total of 1,807 people have been infected with the virus in Kerala and 1,303 in Uttarakhand.

Arunachal Pradesh has 47 COVID-19 cases, while Andaman and Nicobar Islands and Meghalaya have registered 33 infections each.

"8,605 cases are being reassigned to states," the ministry said on its website adding, "our figures are being reconciled with the ICMR."