Khandu assured the gathering of starting a move to scrap the anti-conversion law before the next sessionof the state Assembly. 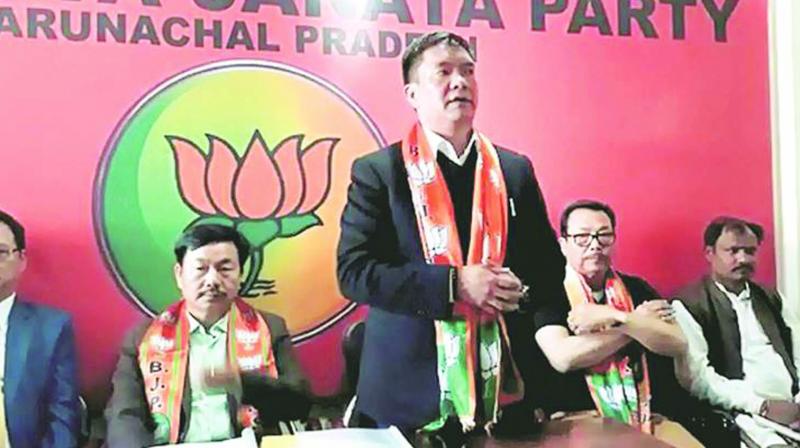 Itanagar: The saffron brigade, spreading its network in the frontier state of Arunachal Pradesh, is not happy with the way former Congress leader-turned-BJP chief minister Pema Khandu has announced his intention to scrap the Arunachal Pradesh Freedom of Religion Act, an anti-conversion law prevalent in the state since 1978.

Mr Khandu made this announcement at a congregation, Prem Milan at Holy Trinity Catholic Church organised by the Arunachal Pradesh Catholic Association. He was of view that this Act may be misused to target Christians. He assured the gathering of starting a move to scrap the anti-conversion law before the next sessionof the state Assembly.

“Any misuse of the law leading to torture of people could trigger large-scale violence and break Arunachal into pieces,” said Mr Khandu.

The chief minister also laid a wreath on the casket of Prem Bhai inside the church. In his speech, Mr Khandu lauded the contribution of the late leader to society. “Prem Bhai today commands respect not only in the Catholic community but across all strata of Christian society and among different faiths,” said Mr Khandu while describing Prem Bhai as a “saint” who brought tremendous changes in Nyishi society and contributed to the development of Arunachal for 25 years.

Mr Khandu also called upon the people to elect well-intentioned leaders. “I am not saying that you should vote for BJP and not for Congress, but vote for the leaders who can perform and have good intentions,” said Mr Khandu at the gathering in which APCC president Takam Sanjoy and former chief minister Nabam Tuki were also present.

The announcement of the chief minister has not gone down well in the rank and file of the BJP as the Indigenous Faith and Cultural Society of Arunachal Pradesh (IFCSAP), a front of the RSS, has taken strong exception to the chief minister’s statement.

Condemning the move, IFCSAP general secretary Bai Taba has termed it insensible, loaded with a minority appeasement motive and detrimental to the growth of indigenous people and their culture. Referring to the phrase — Loss of culture is loss of identity — he said that the move would lead to degradation of state’s indigenous culture. He added that there is a large-scale apprehension among the people that the chief minister is trying to bring citizens under minority or general category, stripping them of special privileges that the Arunachali people enjoy as Scheduled Tribes.

The IFCSAP has also appealed to the chief minister to withdraw his statement or face a statewide movement.