India   All India  07 Aug 2020  Air India Express flight with 191 on board crashes during landing at Kozhikode airport
India, All India

As per reports, the incident took place around 7.45 pm amid heavy rainfall. 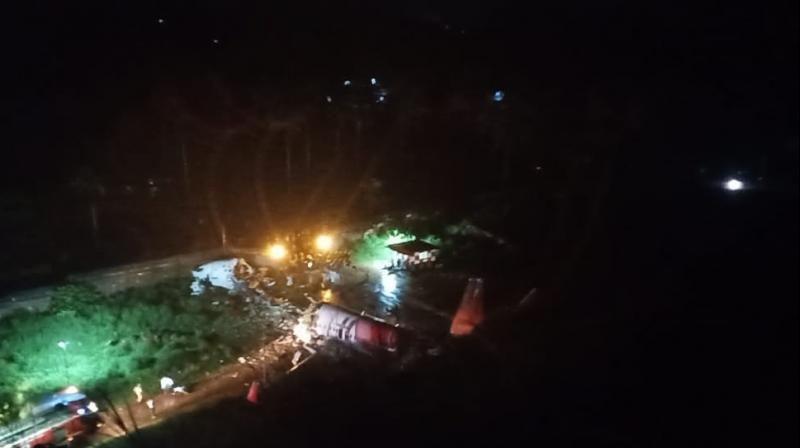 The scene from the crash site. (ANI)

An Air-Indian flight from Dubai (IX-1344) skidded during landing at the Karipur Airport in Kozhikode, Kerala and broke in to at around 7.45 pm on Friday, the Kondotty police said.

The flight from Dubai had 174 adult passengers, 10 children, four crew members and two pilots in the flight. The flight was part of the Vande Bharat programme that has been bringing back Indians from abroad amid the coronavirus pandemic.

Local media reports confirmed the deaths of 17 persons, including the pilot Deepak Vasant Sathe and his co-pilot Akhilesh Kumar.

Fifteen persons were critically injured. At least, 100 or more were also injured. Another cabin crew member, Shilpa Katara, were among those seriously injured.

The pilot of the plane is reported to have had 30 years of experience and was formerly an Indian Air Force pilot.

The pilot had tried for a second landing after the first attempt failed. During the second attempt , the aircraft's tyres got locked, according to DGCA, which ordered a thorough probe into the mishap.

Following the tragedy, other flights scheduled to land at Kozhikode airport were diverted to Kannur airport.

According to a local resident Afzal, he heard a loud noise at 7.49 pm and rushed over to check. The plane had overshot the runway and slid down a slope and crashed into the airport wall, splitting neatly into two at the midsection. Fortunately the plane did not catch fire, possibly averting a much bigger tragedy. Local reports also said it had been raining heavily in Kozhikode at the time of the landing.

The Kozhikode airport is a table-top airport, just like the Mangaluru airport, where a plane crash in 2010 killed all but one passenger. A table-top requires exact precision during landing. Landing in table top runways during heavy rains when visibility is poor is risky.

Eyewitnesses said they rushed to the airport hearing the crash. Initially they were not allowed inside by CISF personnel. But there was just one fire services vehicle for rescue. When the CISF personnel realised there were not enough staff to rescue the injured passengers who were wailing in pain, they allowed local residents to assist with the rescue and shift the injured on private vehicles before the ambulances began arriving.

Later, the NDRF joined the relief and rescue operations at the airport. According to reports, they also rescued two people buried under the debris of the flight.

Tragic scenes from one of the hospitals where passengers from the flight have been taken to for treatment. #KeralaRains #Kozhikode #Planecrash #kerala #Calicutairport pic.twitter.com/aeGXDxeaMA

Visuals of the accident broadcast by TV channels showed ambulances streaming into the airport and injured passengers being carried away on stretchers.

Kozhikode and Malappuram district collectors were tasked with co-ordinating the rescue operations. The collector of Kozhikode put out a helpline as well. Relatives of passengers on board Air India Express Flight (IX 1344) can contact the following helpline number: 0495 - 2376901.

A scene from the crash site. Rescue operations are on.