India   All India  07 Aug 2020  Manoj Sinha sworn in as Jammu and Kashmir's Lieutenant-Governor
India, All India

Manoj Sinha sworn in as Jammu and Kashmir's Lieutenant-Governor 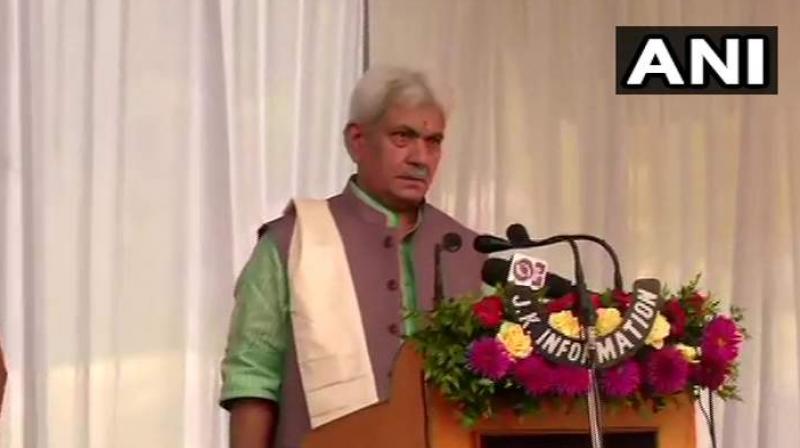 Srinagar: Former Union minister Manoj Sinha was on Friday was sworn in as the new lieutenant-governor of Jammu and Kashmir, the first political leader to take charge of the union territory.

The 61-year-old was administered the oath of office by Jammu and Kashmir Chief Justice Gita Mittal at a simple function in the Raj Bhavan.

"August 5 is a very important day in the history of Jammu and Kashmir. After years of isolation, Jammu and Kashmir joined the national mainstream. I have been told that many works which could not be completed in years have been completed in the past one year," Sinha told reporters after taking oath. "I want to accelerate that development," he added.

The National Conference stayed away from the ceremony for which both Farooq Abdullah and Omar Abdullah were invited.

The National Conference has said the process of democracy should begin by releasing their detained leaders as well as former chief minister and PDP chief Mehbooba Mufti.

On August 5, they were not allowed to meet. Two days later, we are asked to participate in the oath taking ceremony, an NC leader said.

Advisors to the previous lieutenant governors, including Farooq Khan and Baseer Khan, as well as senior bureaucrats and policemen were present at the function in the Raj Bhavan.

The Centre’s decision to appoint the former minister of state for railways as Jammu and Kashmir’s new lieutenant-governor, replacing G.C. Murmu (who is tipped to be the next Comptroller and Auditor-General after incumbent Rajiv Mehrishi retires on August 7), is to send a clear signal that it wants to restart the J&K political process.

Sources said Prime Minister Narendra Modi was keen that a “seasoned politician” than someone with a bureaucratic or military/intelligence background be made the new lieutenant-governor. Home ministry sources said in order to restart the political process, the government wanted an experienced politician as the UT’s administrative head.

Sinha reached Srinagar Thursday evening by a state plane, soon after his predecessor flew out, and held an informal meeting with the chief secretary and the four advisers to the former L-G.

Sinha is a three-time Lok Sabha MP who lost the 2019 election from Gorakhpur. He is said to enjoy the confidence of both Prime Minister Modi and home minister Amit Shah. In 2017, he was a frontrunner for the post of UP chief minister after the party swept the 2017 elections. Besides railways, he had served as MoS communications.