Any city in the world would have collapsed in such situation, said BMC chief 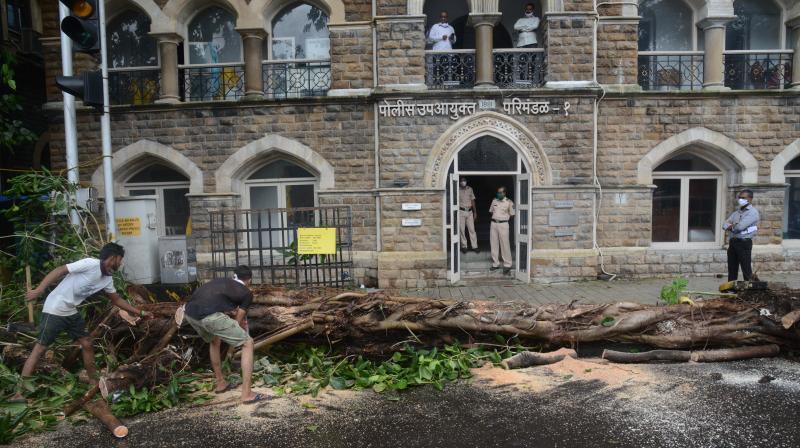 Due to continuous torrential rains, many trees fell on the road in south Mumbai. The Colaba observatory in south Mumbai recorded 330 mm rainfall in the 24-hour period ending at 5.30 am on Thursday. — Rajesh Jadhav photo

With rainfall of 300 mm in just four hours, any city in the world would have witnessed flooding. It was a storm-like situation in Mumbai on Wednesday, claimed Iqbal Singh Chahal, the chief of Brihanmumbai Municipal Corporation (BMC).

“South Mumbai area received a heavy rainfall of 300 mm in just four hours with the wind speed of 100 kmph. Even during the deluge on July 26, 2005, South Mumbai had not come across such a situation. Major areas like Nariman Point, Colaba in South Mumbai witnessed a record rainfall. Due to this, there was waterlogging in these areas,” said Mr Chahal.

A retaining wall on BG Kher Marg in South Mumbai caved in on Wednesday night due to heavy rainfall, also causing heavy damage to four underground pipelines. The BMC chief visited the site on Thursday to take the stock of the situation. The civic body has undertaken repairs of these pipelines to ensure water supply to South Mumbai areas is regularised at the earliest, said Mr Chahal.

Meanwhile, Mumbai is slowly limping back to normalcy following the havoc caused due to incessant rains and gusty winds that lashed the city on Wednesday.

For the first time in recent memory, South Mumbai witnessed heavy waterlogging in areas like Nariman Point, Marine Drive, Girgaon Chowpatty etc. The road outside Mantralaya, the secretariat of the Maharashtra government at Nariman Point, was submerged in rainwater. The state government-owned JJ Hospital also witnessed heavy waterlogging on the ground floor, which houses casualty ward and other departments.

Due to strong winds, the signage atop the Bombay Stock Exchange (BSE) building was damaged heavily, whereas at Jaslok Hospital in Peddar Road, the cement claddings of its buildings fell down.

At DY Patil Stadium in nearby Navi Mumbai city, the roof and outer railings were blown away due to gutsy winds. Three high capacity cranes at the Jawaharlal Nehru Port Trust (JNPT) in adjoining Raigad district also collapsed.