The meeting was held in four-nation 'Quadrilateral' format, involving India, the US, Japan and Australia 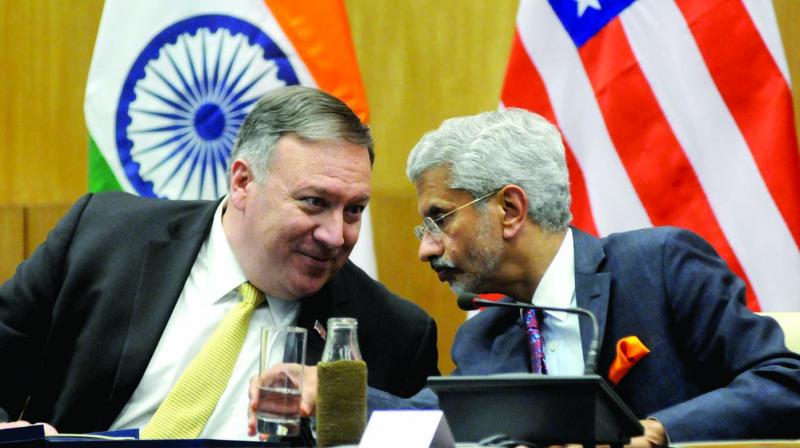 New Delhi: The current Sino-Indian military stand-off as part of “recent destabilising actions in the region” by China is understood to have been discussed during a phone call between External Affairs Minister S. Jaishankar and US Secretary of State Michael R. Pompeo on Friday.

During the conversation, both nations also decided to hold a meeting in the four-nation “Quadrilateral” format---involving India, the US, Japan and Australia---in what appears to be a clear intent to increase cooperation amid increasing Chinese military assertiveness in the region.

The US State Department’s Principal Deputy Spokesperson Cale Brown said, in a statement, “Secretary of State Michael R. Pompeo spoke today with Indian Minister of External Affairs Dr. S. Jaishankar to discuss ongoing bilateral and multilateral cooperation on issues of international concern, including efforts to combat the COVID-19 pandemic, support the peace process in Afghanistan, and address recent destabilizing actions in the region.”

The US added, “Secretary Pompeo and Minister Jaishankar reiterated the strength of the United States-India relationship to advance peace, prosperity, and security in the Indo-Pacific and around the globe.  Both leaders agreed to continue close cooperation on a full range of regional and international issues and look forward to Quadrilateral consultations and the U.S.-India 2+2 Ministerial Dialogue later this year.”

Meanwhile, EAM Jaishankar tweeted on Friday, “A wide-ranging conversation yesterday night with @SecPompeo. Reviewed our bilateral cooperation including working of relevant mechanisms. Shared assessments on regional and global issues including South Asia, Afghanistan, Indo-Pacific & beyond. Exchanged views on responding to the Coronavirus challenge. Discussed meeting in the Quad format in the near future.”