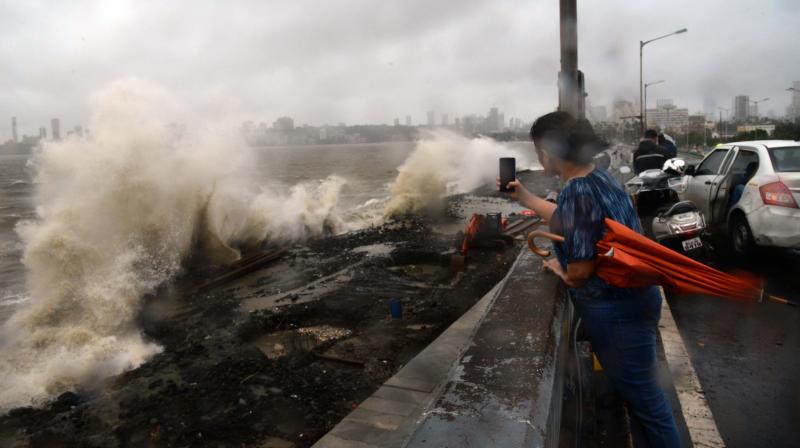 A girl takes a selfie of the huge tides at the Marine drive in Mumbai. — Rajesh Jadhav

Maharashtra Chief Minister Uddhav Thackeray on Thursday took stock of the state administration’s preparedness in the wake of the incessant heavy rains in Mumbai and asked the authorities to remain alert. Meanwhile, Prime Minister Narendra Modi spoke with Mr Thackeray about the prevailing situation in Mumbai and surrounding areas due to heavy rains and assured all possible support to combat the heavy downpour.

Mumbai city received 331.08 mm rainfall while the suburbs received 162.3 mm downpour from Wednesday till 8.30 am on Thursday. The city witnessed strong winds at a speed of 106 km per hour while elsewhere it was 70 to 80 kmph. There were 361 incidents of uprooting of trees and branches and 15 incidents of wall collapse in Mumbai.

A railway employee was killed due to electrocution from a motor pump in Masjid Bunder while one person was injured when a tree fell on him in Kurla. A senior railway official said that 27-year-old trackman Sanjeet Kumar, who was monitoring water level at Masjid Bundar, got electrocuted at around 3.45pm.

“We have asked the BMC to check all their water pumping sets, used to drain the water accumulated on the railway tracks to avoid any such situation in the future,” he added.

The chief minister also praised the railway police and the National Disaster Response Force (NDRF) personnel for their efforts in rescuing 290 passengers from two local trains stranded on flooded tracks near Masjid Bunder in south Mumbai on Wednesday.