Pavan Dhall, an activist who has been a part of the queer movement for two decades, said the feeling was sinking in. 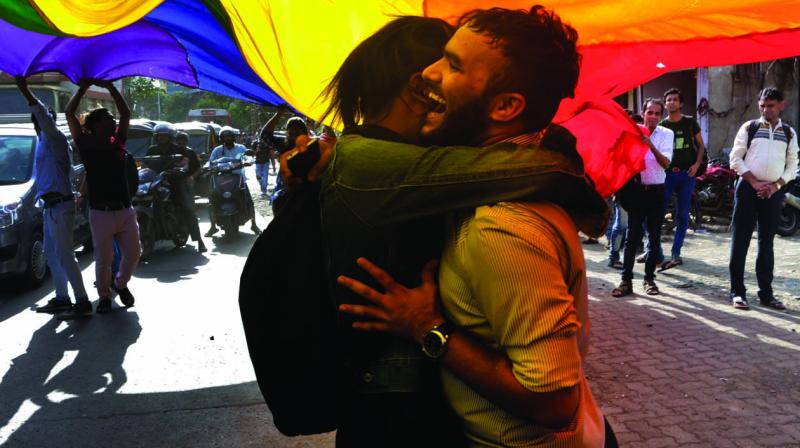 Gay rights activists celebrate in Mumbai on Thursday after the Supreme Court struck down Section 377 that made homosexual acts which carry a masimum punishment of life term. (Photo: AP)

New Delhi: Some cut cakes, others hugged each other with tears of joy and many danced their hearts out as rainbow flags, symbols of gay pride, swirled in the skies with the LGBT community breaking into impromptu jubilation on roads, in hotels and other places after the Supreme Court’s historic judgment on Thursday that decriminalised consensual gay sex. Celebrities from different walks of life, authors, legal experts, students, teachers and  politicians joined the celebrations of activists, who have been fighting a long-drawn battle against the colonial era law which criminalised consensual homosexual acts between two consenting adults and held it an offence punishable with life sentence.

“This is a great moment for everyone and the culmination of a lot of struggle,” said an activist who requested to not be named, since she is not out to her family.

While the Supreme Court hearing was in the afternoon, people from the LGBT community gathered in front of their television sets, waiting anxiously for the verdict to be announced. Tears flowed and people hugged each other spontaneously, when the judgment flashed across their television and mobile phone screens.

While the LGBT community hailed and celebrated the Supreme Court verdict, many felt that their fight may still go on as complete equality remains some distance away due to fears of police and mob violence and continuing legal obstacles to right to adoption and gay marriages.

Pavan Dhall, an activist who has been a part of the queer movement for two decades, said the feeling was sinking in.

“But it is also true that the fight for civil rights remains. This decriminalisation is important but wider rights for the community as citizens is something we will fight for,” said Mr Dhall.

For many activists, the apex court verdict is a harbinger of better days to come. Activist Anjali Nazia said the Supreme Court has paved way for bigger judgments ahead. “We were granted a basic human right today and we can’t express just how happy we are.” Terming the change “historic”, LGBT activist Ankit Gupta of the Humsafar Trust said the fight for equality continues and there is still a long way to go for it

Another activist said, “Tomorrow when we wake up we would be able to look in the mirror and not see ourselves as second class citizens or criminals.”

Echoing similar sentiment, Anjan Joshi, member of the Society for People, Awareness, Care and Empowerment (SPACE), said the court verdict would help them in their quest for equality. “It is a start. We know we have a long way to go in terms of right to adoption, right to marriage but it is a very welcome beginning.”

Activist Arpit Bhalla said, “We are finally not criminals and this minuscule minority has an identity now.” Writer Chetan Bhagat said India will survive and thrive only by accepting diversity.  Feeling jubilant and emotional, feminist activist Rituparna Borah called the verdict a stepping stone. “But there are issues like police violence, right to adoption and marriage that still stay,” the activist said.

Filmmaker Karan Johar also hailed the verdict and said it is a huge thumbs up for humanity and equal rights. “The country gets its oxygen back!” he wrote on Twitter. Expressing his happiness, senior Congress leader Shashi Tharoor said the judgment  “shamed” BJP MPs who had opposed him on the issue in the Lok Sabha.

The United Nations also lauded the Supreme Court and said the judgment will boost efforts to eliminate stigma and discrimination against LGBT persons.

Film director Hansal Mehta, who made “Aligarh” on the life of an Aligarh Muslim University professor Ramchandra Siras who had faced discrimination for being gay, called the verdict a new beginning.

He tweeted, “A new beginning. The law is gone. The Supreme Court has done what Parliament failed to do. Now it’s time for attitudes to change. Let’s rejoice but let us also reflect.”