Vaid, a 1986-batch IPS officer, was transferred and posted as the transport commissioner. 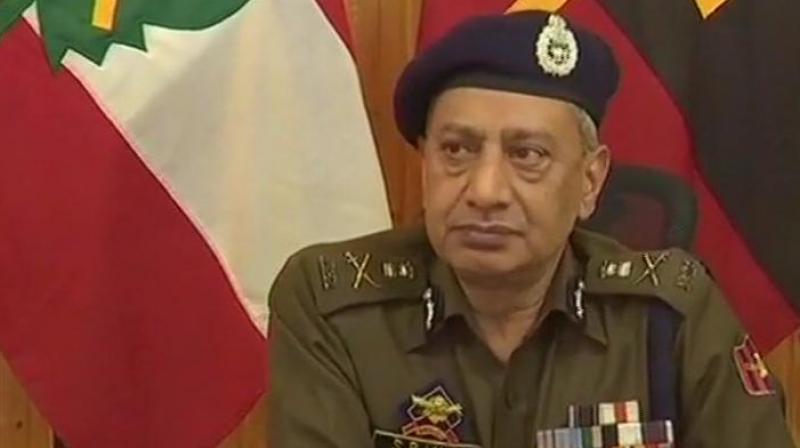 Vaid's services have been placed at the disposal of the General Administration Department for posting as the state Transport Commissioner. (Photo: ANI | Twitter)

Srinagar: Jammu and Kashmir police chief S P Vaid was unceremoniously removed late Thursday and shunted as the Transport Commissioner and Director General of Prison Dilbagh Singh was directed to look after the force until a regular appointment was made.

"In the interest of administration the following transfers and postings are hereby ordered with immediate effect, Dr SP Vaid, IPS (JK: 1986), DGP, J&K is transferred and his services are placed at the disposal of General Administration Department for further posting as Transport Commissioner, J&K," reads the order issued on Thursday by the Jammu and Kashmir government civil secretariat home department.

SP Vaid, a 1986-batch IPS officer, had been appointed as the Director General of Police in December, 2016. He is due to retire in October next year.

Singh, who has been made the in-charge Director General of Police, is a 1987-batch officer. He was made the head of the prison department in March after the infamous escape of Lashkar-e-Taiba (LeT) terrorist Naved Jhatt while the latter was on a routine health check-up at a city hospital in February. Singh, during his tenure as Director General of Prisons, streamlined many things, including the removal of hardened terrorists from Kashmir jails. He will have a regular appointment only after his name is cleared by the UPSC.

Earlier, reports were rife that the Ministry of Home Affairs (MHA) was not happy with the state police and was considering a rejig.

The Home Ministry, however, denied these reports and said, "On more than one occasion, MHA has commended the work done by the Jammu and Kashmir police and the valiant sacrifices made by the men and officers of J&K police. There is no question of any dissatisfaction."

Vaid had also brushed aside this report saying that the state police has been fighting a proxy war for decades and any speculative reporting, which can affect the morale of the cops, should be avoided.