SP Vaid, 1986 IPS officer of J&K cadre, was on Thursday night removed as DGP and replaced by Dilbagh Singh as an interim head. 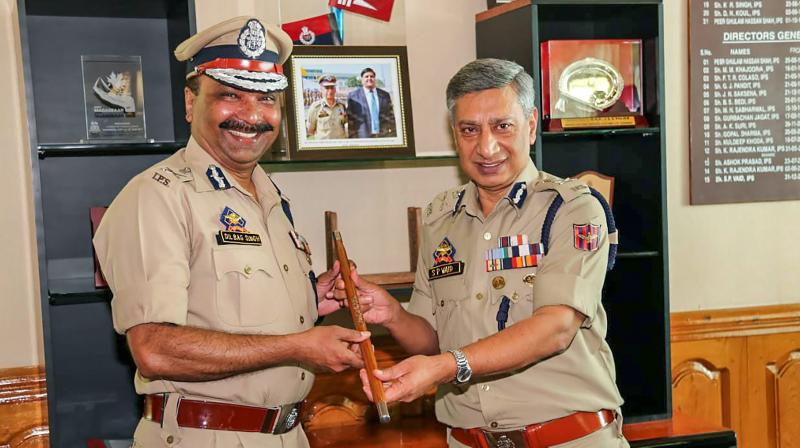 Singh, the IPS officer of 1987 batch, who is serving as the DG prisons for past several months has been given additional charge as the DGP of J&K. He took over as the new police chief on Friday. (Photo: PTI)

Srinagar: The unceremonious exit of Jammu and Kashmir’s police Chief Shesh Paul Vaid has led to spread of rumours and speculations across the restive state.

Paul, the 1986 IPS officer of the J&K cadre, was on Thursday night removed as Director General of Police (DGP) and replaced by Dilbagh Singh as an interim arrangement till the formal appointment of the new police chief for the State.

Singh, the IPS officer of 1987 batch, who is serving as the DG prisons for past several months has been given additional charge as the DGP of J&K. He took over as the new police chief on Friday.

Vaid has been transferred and appointed as Transport Commissioner, a post which was held by Saugat Biswas, a 2006-IAS officer.

The post has been upgraded from Additional Secretary to the rank of Secretary. It will be headquartered in Jammu, the state’s winter capital.

The appointment of Singh as the interim head of the state police organization is a violation of the guidelines of the Supreme Court (SC), which had ruled in July that there will be no ad hoc arrangement for the post of police chief in the states without consulting the Union Public Service Commission (UPSC).

The J&K government has, however, tried to justify its decision by asserting that since the state police has been fighting militancy for the last three decades, it cannot be left headless for a minute.

Shoeb Alam, the standing counsel for the state, on Friday, moved an application before Chief Justice of India Dipak Misra to explain the reason behind appointing an interim DGP in the state without following the guidelines issued by the apex court in July this year.

The matter is likely to be taken up by the apex court on Monday.

A 3-member bench of the SC comprising CJI Dipak Misra and Justices A M Khanwilkar and D Y Chandrachud had while taking note of an application filed by the Centre said that none of the states “shall ever conceive of the idea of appointing any person on the post of Director General of Police on acting basis, for there is no concept of acting Director General of Police.”

The top court had also ruled that all the states shall send their proposals in anticipation of the vacancies to the UPSC well in time, at least three months prior to the date of retirement of the incumbent on the post of DGP.

The Centre had in its application to the SC claimed that certain states have been appointing acting police chiefs and then making them permanent just before the date of their superannuation to enable them to get the benefit of an additional two-year tenure till the age of 62 years.

Meanwhile, J&K is agog with rumours that Vaid was removed as the state’s police chief unceremoniously because the Home Ministry was not happy over the stand he took over certain issues during his stint as the head of the force.

Vaid, 59, who is a native of J&K’s Kathua district, was appointed as the DGP on December 31, 2016, replacing K Rajendra Kumar, a 1984 IPS officer from Hyderabad, Telangana.

Some reports suggest that the Home Ministry higher-ups were discontented with the manner in which the recent crisis set off by the police’s detaining the family members and other close relations of some commanders of Hizb-ul-Mujahideen were handled by it.

The outfit had retaliated to the police action by abducting three policemen and seven relatives of other members of the force and, after a two-day stalemate, all the abductees were freed unharmed but that only after the police had released the detainees including the father of top Hizb commander Riyaz Naikoo.

This was seen locally as being a ‘moral victory’ for the militants and an embarrassing moment for the police.

Another issue being cited as a reason for Vaid’s abrupt transfer is the reported unease caused in the corridors of power in New Delhi by a purported letter written to the Home Ministry by him cautioning it of a possible revolt in the J&K police organization in the event of Article 35A of the Constitution being abolished.

The buzzword back in the state is that the Home Ministry saw in it an attempt to shift the responsibility of controlling the situation in such an eventually to the Centre instead of dealing with it locally and was quite dejected over it.

The SC had on August 31 deferred the hearing on petitions challenging the constitutional validity of Article 35A after its three-member bench headed by Chief Justice Dipak Misra was informed by Attorney General K K Venugopal and Additional Solicitor General Tushar Mehta, representing the Centre and Jammu and Kashmir government respectively, that in view of the impending eight-phased local body elections and law and order situation in the state, the hearing be deferred.

The Bharatiya Janata Party (BJP) is very much against continuation of Article 35A as well as Article 370 which guarantees J&K a special status within the Indian Union.

Vaid is reported to have irked the party leadership in the state by his alleged asserting that being a resident of J&K he also believes that abrogation of Article 35A won’t be in the interest of the state and its people.

Also, the BJP and likeminded political groups had openly criticized the stand of the J&K police under Vaid over the alleged gangrape and murder of an 8-year-old nomad Bakarwal girl inside a temple in Rasana village of Kathua, incidentally the home district of the then police chief, in January this year.

The BJP’s demand that the case which was investigated by the Crime Branch of the J&K police be handed over to the Central Bureau of Investigation (CBI) was turned down by Chief Minister Mehbooba Mufti. The BJP insiders said that the role played by Vaid, in this case, was not to the liking of the party.

It is also said that Vaid and the Home Ministry officials held divergent views on the question of effecting reforms in the working of J&K police.

This was the second major transfer in the state police apparatus. Earlier this week, the Governor’s administration replaced senior police officer Abdul Gani Mir by B. Srinivas as J&K’s intelligence chief.

While reacting to the manner in which Vaid’s has been replaced as the police chief, former chief minister Omar Abdullah, questioned the wisdom behind the decision. He asked “why a DG as a temporary arrangement?"

Abdullah on Friday tweeted, “The current DG won’t know if he’s going to stay and others who would like his job will be trying to replace him. None of this is good for Jammu and Kashmir police”.

In another tweet, he said, “He (Vaid) should have been changed only when a permanent arrangement had been worked out. @JmuKmrPolice has enough problems without having to deal with confusion of leadership.”