PM Modi came to Mumbai after meeting the ISRO scientists in Bengaluru. 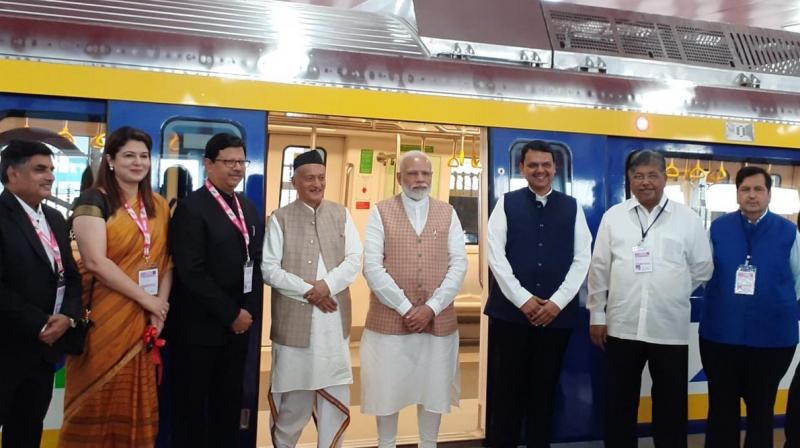 Modi took a tour of the new coach and the train with Maharashtra Chief Minister Fadnavis and Mumbai Metro officials. (Photo: Twitter)

Mumbai: On Saturday, Prime Minister Narendra Modi inaugurated the first coach for Mumbai Metro built under the ‘Make in India’ programme. He took a tour of the new coach and the train with Maharashtra Chief Minister Fadnavis and Mumbai Metro officials.

PM @narendramodi, Governor of Maharashtra @BSKoshyari, CM @Dev_Fadnavis and other dignitaries at inauguration of the first metro coach under #MakeInIndia #MumbaiMetro pic.twitter.com/W3kUWQRYyF

After landing in Mumbai, Modi went for a ‘darshan’of Lord Ganesha at the 96-year-old Lokmanya Seva Sangh at Vile Parle in Mumbai.

He came to Mumbai after meeting with scientists of the Indian Space Research Organisation (ISRO) in Bengaluru. The Prime Minister had gone there to see live the landing of the Chandrayaan-2 mission, which did not go as planned.