Ramani was the first woman to accuse Akbar of sexual harassment during the #MeToo campaign. 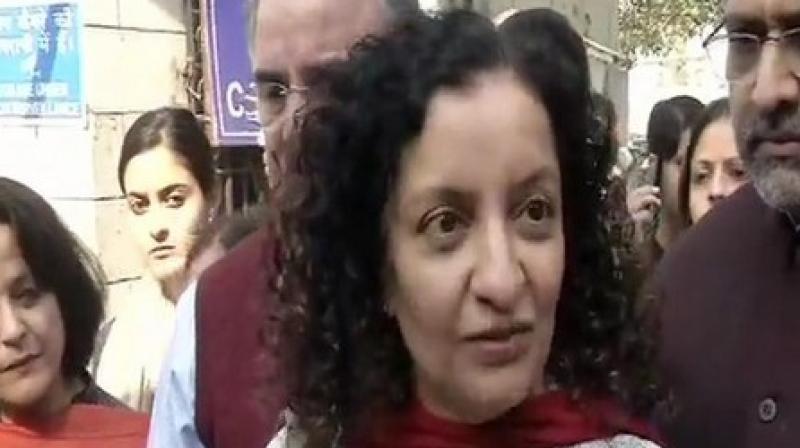 Ramani, who testified as the first witness in the case, was heard by the Court of Additional Chief Metropolitan Magistrate (ACMM) Samar Vishal. (Photo: ANI)

New Delhi: Priya Ramani, a journalist against whom M J Akbar had filed a defamation case for levelling sexual harassment allegations, on Saturday narrated before a local court what she encountered when she met him in his hotel room on an evening for a job interview.

Ramani, who testified as the first witness in the case, was heard by the Court of Additional Chief Metropolitan Magistrate (ACMM) Samar Vishal.

As hearing resumed, she said: "I have been a journalist for 25 years. I did my Bachelors in Psychology at St Xavier's college in Mumbai and graduated in 1991. I also went to the United States for Masters in Journalism at Temple University."

Explaining about her professional life, she said that she started her career with the Asian Age, where she had worked for a period of 10 months, from January to October 1994. Later she joined news agency Reuters and then became an editor of Cosmopolitan magazine in 1999.

As years passed by, she joined the Indian Express as Associate Editor and National Features and also worked as founding editors of Mint Newspaper for 8 years. Ramani, who lives with her family in Bengaluru, said that currently she is working writing a weekly column for Mint Lounge, contribute to Vogue Magazine and other news websites.

Describing how she met Akbar in the Oberoi Hotel, she said "When I reached the lobby and looked around for Mr Akbar but I could not see him. Then I asked the reception to connect me to him. He asked me to come up to his room. I was silent and hesitant, he then asked me to come up," she said.

She asserted that she thought that the interview would be at the "coffee shop or lobby of the hotel".

"I thought the interview would be at the coffee shop or lobby but I was 23 and not that confident to say "no, I will wait for you in the lobby." I did not know that I could dictate the terms of the interview. I was hesitant but went up. I rang the bell, he answered and I entered his room," she said.

Stating that the room where the interview was scheduled was "small and enclosed", Ramani said: "The bed was turned down for the night, there was a small two-seater sofa near the bed. It was a big window and I could see it was a sea-facing room, there were 2 chairs and a small table adjacent to the window and we sat there. I felt ill at ease to be in such an intimate space for a professional interview. I was acutely aware that I was alone in this room with him."

When the lawyer asked her to explain what happened thereafter, Ramani said: "Akbar asked me why I had gone to the US to study journalism. I replied that it was my dream to be a journalist, that this job was important to me, especially since it was my first job. He then asked many personal questions. He wanted to know if I was married, I said no. He wanted to know if I had a boyfriend, I replied no. He asked me many questions about my family, I told him that my parents are keen that I have an arranged match. He offered me alcohol from the minibar but I refused."

"He got up and made a drink for himself. I think it was Vodka. He then asked me about my music preferences, when I replied he started singing old Hindi songs to me, I felt extremely uncomfortable at all these inappropriate personal questions. He did not discuss my writing skills, my knowledge of current affairs or any journalism-related question," she said.

"Then he moved to the small two-seater sofa next to the bed and gave me a gesture to come and sit in the tiny space next to him. I was already feeling unnerved by his inappropriate behaviour. Now I was concerned for my physical safety. I knew I had to leave the room immediately. I got up and said I had to leave. As I was leaving, Mr Akbar said his office would follow up about the job," she added.

Ramani told the court that she explained about the whole incident to Nilofer but not to her parents as she was afraid of losing her career.

"I caught a taxi home and later at night from my landline, I called Nilofer (her friend) and told her what had happened. She was shocked to hear about Mr Akbar's behaviour. I told her I couldn't tell my parents because they would ask me to refuse the job offer if I got it and I would have to give up my dream of being a journalist."

"We discussed whether I should accept the job if I got it with such a man at the helm of this organisation. With our limited experience and the enthusiasm of the youth, we reasoned that it was a new newspaper and there would be many employees and the editor, being a busy man, would not have time for a newcomer. I swore that I would never be in a room alone with him ever again," she said.

Ramani was the first woman to accuse Akbar of sexual harassment during the #MeToo campaign.

Akbar, the former Minister of State for External Affairs, had filed a defamation case against the journalist for accusing him of sexual misconduct. The allegations levelled against him forced him to resign from the Union Cabinet on 17 October 2018.