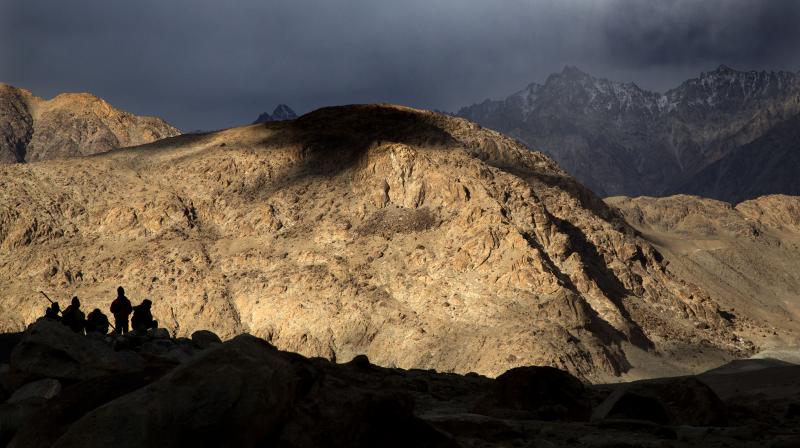 Sept. 2018 file photo of Border Roads Organization workers resting near Pangong Lake in Ladakh. India is bolstering its border presence in view of the standoff with China. (AP)

New Delhi: Following specific intelligence that China could use Pakistan to trigger large-scale incursions, the Border Security Force (BSF) and the Army have been put on high alert along the international border and the Line of Control (LoC).

“We have specific inputs that Pakistan could try and foment trouble along the border. But we have taken adequate preventive measures and substantially increased our security presence along the Indo-Pak border,’’ a senior BSF official said.

India and China have been engaged in a tense military standoff in the Ladakh sector since May. Tensions between the two armies flared up again last week after India, in a preemptive move, occupied around two dozen peaks on the southern banks of the Pangong Tso and Spanggur Gap.

Given the tense situation along the India-China border, intelligence inputs were received that in an attempt to divert the attention of Indian security forces, China could use Pakistan to start an armed offensive along the border and LoC by violating the ceasefire line.

Earlier, the Union Home Ministry had increased the presence of forces along some parts of the India-China border, particularly in Sikkim and Uttarakhand.

Close to 100 companies or 10,000 personnel of paramilitary forces have been rushed to the border area. Most of the additional security companies that have been deployed along the Chinese frontier are those that were pulled out of Jammu & Kashmir a couple of weeks back.

Both ITBP and SSB have beefed up security deployment in the Doklam region in Sikkim and Kalapani region in Uttarakhand following increased Chinese activity noticed in these sectors.

Chief of defence staff (CDS) Gen Bipin Rawat had on Thursday said that Pakistan could try to take advantage of any threat developing along India’s northern borders but warned that the Pakistani Army would suffer heavy losses if it attempted any misadventure.