46 pc rise in complaints of crimes against women in 2021 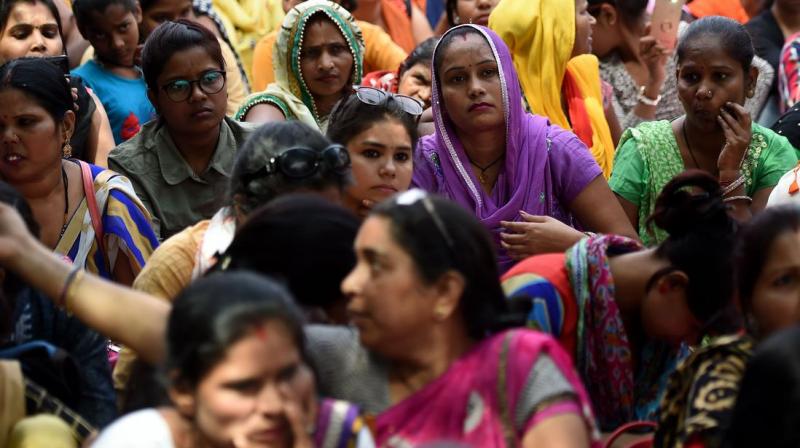 The right to live with dignity clause takes into account the emotional abuse of women. (AFP Photo)

New Delhi: There was a 46 per cent rise in complaints of crimes against women in the first eight months of 2021 over the corresponding period of last year, and over half of these were from Uttar Pradesh, the National Commission for Women (NCW) said.

NCW chief Rekha Sharma said there has been a rise in the complaints because the commission has been regularly conducting awareness programs due to which the public is now more aware about its work.

The NCW received a total of 19,953 complaints of crimes against women from January to August this year, up from 13,618 in the corresponding period of 2020, it said.

In July, as many as 3,248 complaints were received by the NCW which is the highest in a month since June 2015, it added.

Of the 19,953 complaints, the highest number of 7,036 were recorded under the right to live with dignity clause, followed by 4,289 complaints of domestic violence and 2,923 complaints of harassment of married women or dowry harassment, the NCW said.

The right to live with dignity clause takes into account the emotional abuse of women.

As many as 1,116 complaints have been received regarding the offence of outraging modesty of women or molestation, followed by 1,022 complaints of rape and attempt to rape and 585 complaints of cyber crimes.

Among states and union territories, the highest number of complaints was received from Uttar Pradesh (10,084), followed by Delhi (2,147), Haryana (995) and Maharashtra (974), the commission said.

NCW chief Sharma said the rise in the number of complaints is because of increased awareness among women to report crimes.

"Also, the commission has always made it a point to launch new initiatives to help women. Keeping in line with this, we have launched a round-the-clock helpline number as well to provide support services to women in need where they can also register a complaint," Sharma told PTI.

Akansha Srivastava, founder of the Akanksha Foundation which works for education and empowerment of people by imparting knowledge on cyber safety, said the rise in complaints is due to more awareness among women to reach out for help.

"When complaints rise it is a good thing because it means more women have the courage to speak up and there are platforms in place now and they are aware of where to report. People are reaching out now. Earlier women might not be coming forward to lodge their complaint...they didn't know what they are going through is harassment but now they do, and they are coming forward to report which is a good thing," she said.