Modi who is on a two-day visit to his home state Gujarat, will lay foundation stones and inaugurate a number of projects. 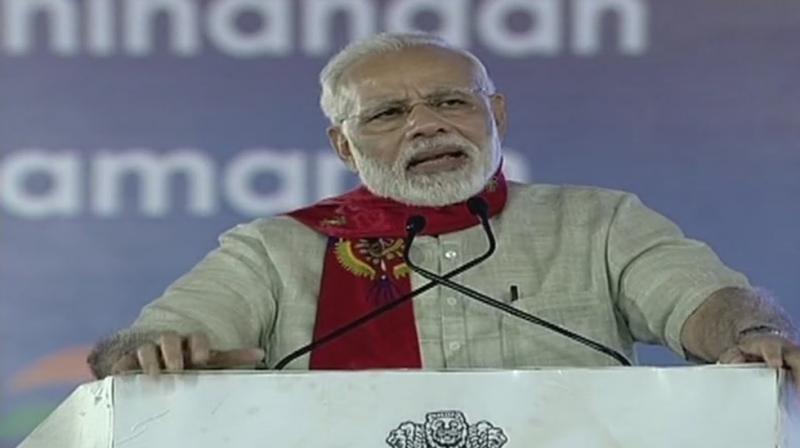 Making India digitally advanced is one of the many visions of Prime Minister Narendra Modi after he came to power in 2014. (Photo: ANI)

Gandhinagar: Prime Minister Narendra Modi on Saturday stressed upon the benefits of going digital and said that work was underway to spread digital literacy to every part of India.

Modi said, "Work is underway to spread digital literacy to every part of India, among all age groups and sections of society."

The PM said in the present time India cannot afford to have a digital divide.

He said, "Digital technology, digital literacy, and digital India should be the focus of a good government."

Making India digitally advanced is one of the many visions of Prime Minister Narendra Modi after he came to power in 2014.

Addressing a gathering at the Indian Institute of Technology, Gandhinagar, the Prime Minister said, "You are IIT-ians, I was a Tea-ian when I was young (I sold tea). On this day, a few years ago, I took oath as Chief Minister for the first time. Till then, I had never even been an Member of Legislative Assembly. I had decided that whatever I will do, I will do to the best of my abilities."

Modi said, "If I had decided to built an IIT here (Gandhinagar) earlier, some people would have criticised me the way they criticised the bullet trains and would have said that the focus needs to be on something else in Gujarat. But today, I am happy that this campus is at an equivalent height in comparison to the other IITs in the country."

Read: Diwali has come early due to decisions made in GST Council: Narendra Modi

He said 70 per cent of the faculty of IIT, Gandinagar have been trained at premier institutions abroad.

The Prime Minister said he hopes that IIT-ians would work towards making various innovations possible.

He said, "Today we are working on solar energy, renewable energy, climate change, and we are trying to compete with the world on these. Why shouldn't we innovate more on these lines by which we save energy and utilise them at minimal cost."

Taking pride of his home state, Modi said Gujarat is the only place to have forensic science university in the world.

Modi further said, "Ten private universities and ten government universities would be put on a challenge route. We will invest 1,000 crores on each of them. We will relax the rules and give them the liberty and independence to make their own decisions. We will do whatever it takes to turn them into the 20 top universities."

Prime Minister Narendra Modi is on a two-day visit to Gujarat. The PM will lay foundation stones and inaugurate a slew of projects.

Earlier on Saturday, Modi visited the Dwarkadheesh Temple following which he laid the foundation stone of a sea-link bridge between coastal town of Okha and Bet Dwarka Island.