SSP Nitin Tiwari said that the situation was tense but under control and several students had been detained. 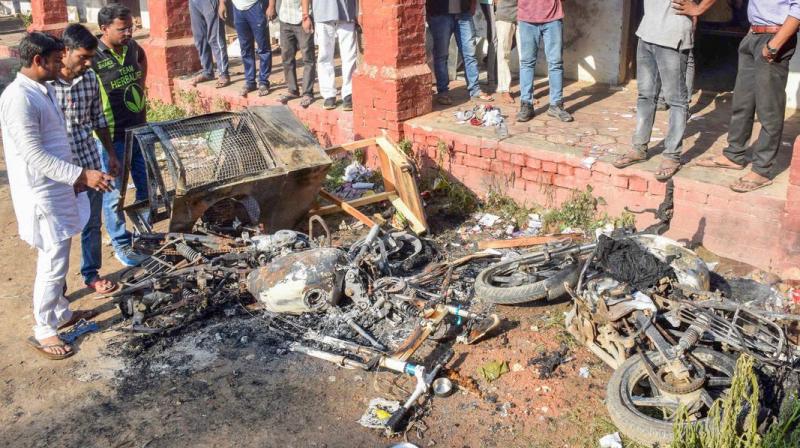 Students look at the charred remains of vehicles and objects after arson on the Allahabad University campus. (Photo: PTI)

Lucknow: Violence erupted on the Allahabad University campus, in the wee hours of Saturday, after the results of the students’ union elections were announced and ABVP suffered a major jolt.

Several rooms in the hostels, including those of the winning candidates, were set ablaze and motorcycles parked there were torched after 1.30 a.m. when the results were announced.

There were also reports of the use of explosives in the violence.

Police resorted to lathi-charge to disperse the agitating students who continued to damage property in Holland Hall hostel where the winning candidates live.

Miscreants also hurled bombs after setting hostel rooms on fire. Several fire tenders were called in to douse the flames.

Uday Prakash Yadav of Samajwadi Chhatra Sabha was declared elected as president, NSUI candidate Akhilesh Yadav was elected as vice-president and Shivam Singh of ABVP was elected as general secretary of the union.

Student leaders claimed that the violence was initiated by those who lost the elections.

Many student leaders were also arrested. The situation remains tense in the varsity campus.

SSP Nitin Tiwari said that the situation was tense but under control and several students had been detained.

An FIR has been registered at Colnelganj police station against former students’ union president and other leaders.