Bihar, UP workers leave Gujarat after attacks over toddler’s rape

A worker from Bihar allegedly raped 14-month-old girl in village near Himmatnagar town, 100 km from Ahmedabad, on Sep 28. 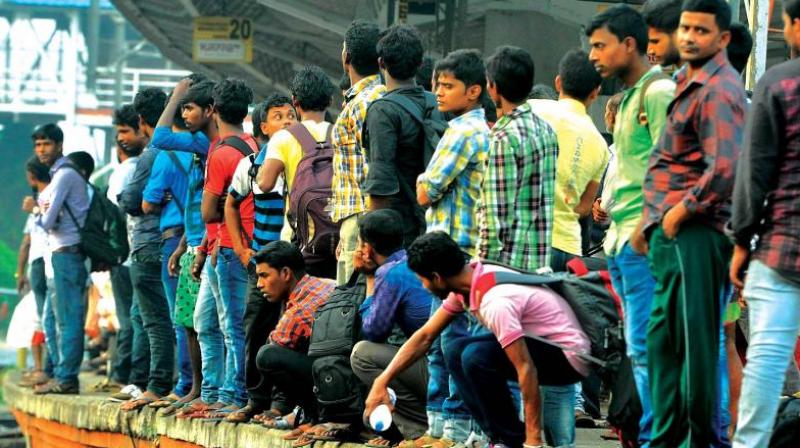 At least 170 people have been arrested in connection with attacks on migrant workers. (Representational Image | File)

Ahmedabad: After a worker hailing from Bihar was arrested for raping a 14-month-old girl in Gujarat’s Sabarkantha district last week, protests broke out against migrant labourers from Uttar Pradesh and Bihar.

According to reports, hundreds of workers have left Gujarat and returned to their home states.

At least 170 people have been arrested in connection with attacks on migrant labourers.

A 14-month-old girl was allegedly raped in a village near Himmatnagar town, around 100 km from Ahmedabad on September 28. A man, identified as Ravindra Sahu hailing from Bihar was arrested the same day and charged with the toddler's rape.

Sahu was working in a local ceramic factory.

The toddler, who is from the Thakor community, has been admitted to the civil hospital in Ahmedabad where her condition is stated to be stable, a report in Hindustan Times said.

Following the incident, hate messages on WhatsApp led to violence and attacks on some people, mostly belonging to Bihar and Uttar Pradesh, in several parts of the state, including Gandhinagar, Ahmedabad, Patan, Sabarkantha and Mehsana.

Congress leader Alpesh Thakor, who heads Thakor Sena in Gujarat, has been accused of fanning violence against the migrant workers.

However, Alpesh Thakor denied the allegations and appealed for peace saying, “This is unfortunate. We have never advocated violence and only talked peace. All Indians are safe in Gujarat”.

On Saturday, Gujarat Deputy Chief Minister Nitin Patel said that he has written to Chief Justice R Subhash Reddy of the Gujarat High Court seeking speedy trial in the rape case of a 14-month old girl.

Patel said he has also sought setting up of fast-track courts for the speedy trial in two other similar cases in Surat and had also requested the chief justice to ensure that the accused get the harshest punishment possible, including capital punishment.