Forest personnel were monitoring the tigress' movements after it got injured, but the carnivore went missing. 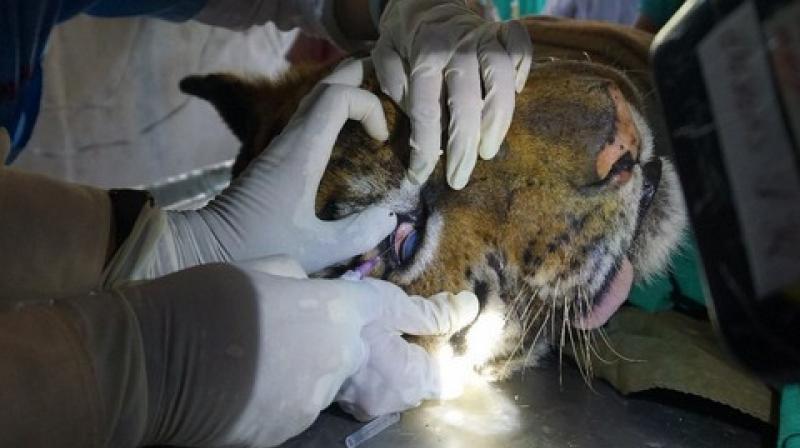 The forest staff was since then searching for the tigress and spotted its carcass in the Tadoba forest range. (Photo: Representational image)

Chandrapur: A two-year-old tigress was found dead in the Tadoba Adhari Tiger Reserve (TATR) in Maharashtra's Chandrapur district on Monday, an official said.

The striped cat was suspected to have been killed in a territorial fight with a bison, a senior officer of TATR said. The feline got separated from its mother 'Maya', a popular tigress of TATR, on October 2, and apparently received injuries in the process of establishing its own territory in the core zone of the reserve, he said.

"It is suspected to have fought a bison following which it received severe injuries," he said.

Forest personnel were monitoring the tigress' movements after it got injured, but the carnivore went missing on October 4.

The forest staff was since then searching for the tigress and spotted its carcass in the Tadoba forest range on Monday morning, he said.

On getting information, senior forest officials along with veterinary doctors rushed to the spot, he said.

During the autopsy, spinal fractures were detected on the carcass, he said. "Some samples have been sent to a lab to find out the exact cause of death," he added.

Maharashtra has six tiger reserves which cover an area of around 9,116 sq km. Pench, Melghat, Sahyadri and Tadoba-Andhari are some of the popular tiger reserves that attract a large number of wildlife enthusiasts every year. Nearly 165 tigers inhabit the state's reserves, an official earlier said.