Telangana Mazdoor Union president clarified agitating workers have not received any notice from govt or management of RTC. 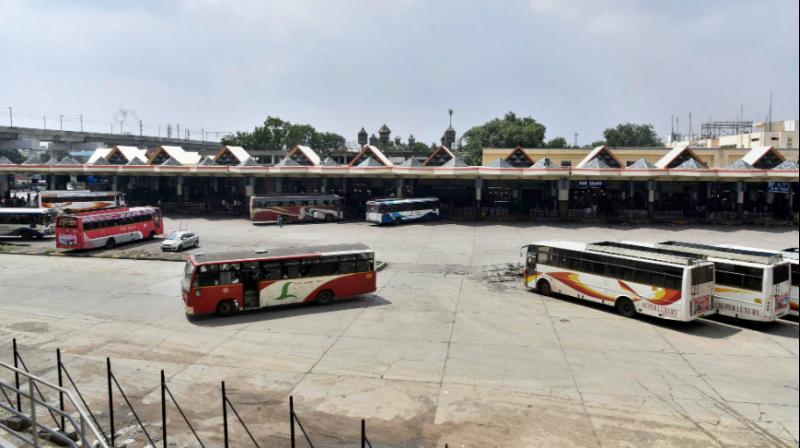 Chief Minister K Chandrasekhar Rao had on Sunday said employees who did not join duty before the deadline (6 pm on Saturday) set by the government would not be taken back. (Photo: PTI)

Hyderabad: Trade bodies of Telangana State Road Transport Corporation (TSRTC) will challenge the state government's decision to sack about 48,000 agitating employees, as and when they are served with dismissal or suspension notices, a union leader said here on Monday.

Telangana Mazdoor Union president E Ashwathama Reddy, however, clarified that the agitating workers have not received any dismissal or suspension notice from the government or the management of RTC.

".. There are laws in this country. We have been appointed as per rules. They cannot remove us just like that," Reddy told PTI.

"There are courts. We will approach courts if necessary," he said.

His statement comes a day after the state government declared the indefinite strike as "illegal" and rejected their demands for a merger with it.

Chief Minister K Chandrasekhar Rao had on Sunday said employees who did not join duty before the deadline (6 pm on Saturday) set by the government would not be taken back.

"As it is there are less than 1,200 employees in the RTC," he had said indicating that those who have not reported for duty before the deadline, would be losing their jobs.

Different employees' and workers' unions of the TSRTC began an indefinite strike on Friday midnight across Telangana on a call given by the Joint Action Committee (JAC) of the corporation, demanding merger of the RTC with the government and recruitment to various posts, among other things.

The stir by nearly 50,000 staff entered the third day on Monday with TSRTC buses staying off the roads hampering travel plans of thousands of people during the festive season.

The chief minister had directed concerned officials to hire 2,500 private buses to make up for the shortfall of public transport.

He also ordered that normal RTC operations be restored in 15 days. New employees should be hired soon and they should give an undertaking that they would not join any trade unions, he added.

The Telangana High Court had directed the state government to file a report on October 10 about the arrangements made. It also ordered to serve notices on two RTC unions.