People feared buried under the debris at blast site 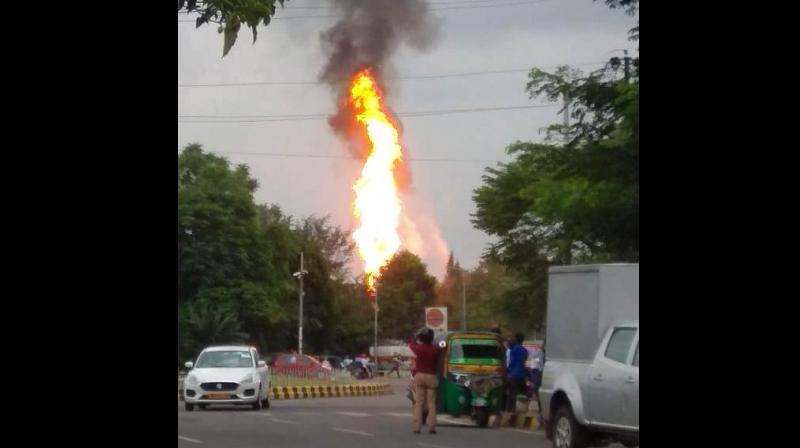 Bhubaneshwar: A loud explosion ripped through a petrol pump station near Raj Bhawan in Odisha capital Bhubaneswar on Monday afternoon.

Nine persons were injured in the incident. All the injured were rushed to the Capital Hospital. Two of the injured who suffered 60 and 40 per cent burn injuries, respectively, were later sent to SCB Medical College and Hospital.

The impact of the devastating blast could be gauged from the fact that pounds of human flesh and severed limbs of the injured persons were strewn around the filling station.

According to a helper of an oil tanker which was waiting for its turn at the filling station to unload Compressed Natural Gas (CNG), the underground CNG tank of the petrol pump blasted at around 1.02 PM.

“The blast occurred when another oil tanker which had arrived before us was delivering CNG to the filling station. Before we could understand what happened, the area was engulfed with fire and smoke. We ran away from the spot to save our lives,” the helper said.

As many as five fire tenders doused the flames after an hour of efforts.

“As per our preliminary information, some people have suffered serious injuries in the mishap. They were all  sent to different hospitals. At this moment, we are focusing on the efforts to ensure that the petrol and diesel reserves stored underground remain safe and do not catch fire,” Commissioner of Police Sudhansu Sarangi said.

The CP informed that one of the two CNG storage tanks of the filling station exploded causing the devouring fire.

In order to prevent any further mishap and fire outbreak to the nearby situated petrol and diesel tanks, the entire stretch of road between Raj Bhawan and Capital Hospital was cordoned off by the police.

Many vehicles including bikes and four-wheelers were blown away in the impact of the blast that eye-witnesses and passersby said it was like an earthquake. Some local shops were stated to have suffered damages due to the explosion.

Bhubaneswar DCP Umashankar Dash said that people nearby the spot of the blast have been vacated to ensure safety.

Union petroleum and natural gas minister Dharmendra Pradhan ordered a probe into the mishap by the departmental secretary.

Forensic officials of the state police collected flesh pieces during the on-the-spot inquiry.

The CP said the Indian Oil Corporation (IOCL) officials visited the place and were making efforts to draw the petrol and diesel reserves stored in the underground tanks.

“The filling station had 10 kilolitres (KL) of Compressed Natural Gas (CNG) reserve, besides 20 KL of petrol and 20 KL premium petrol. The IOCL officials have mobilised their technical personnel to evacuate remaining fuel reserves at the filling station,” said the CP.