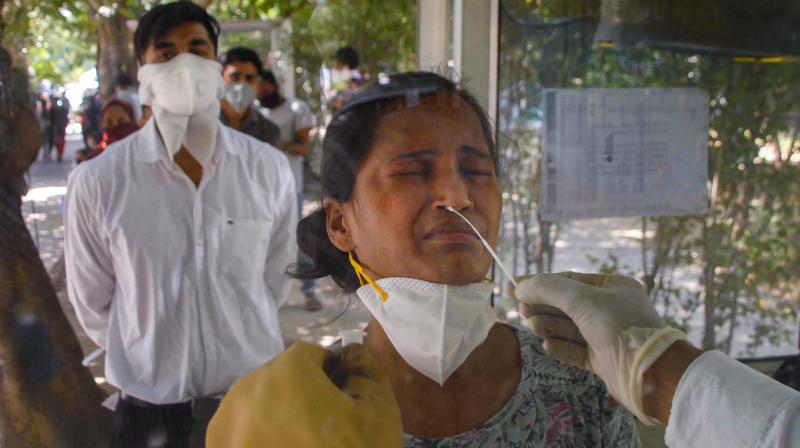 Union health ministry on Tuesday said that a constant decline in fresh cases of novel coronavirus has been noted in the last fortnight and the total number of active cases for the last several days have remained under 10 lakh, raising hope that the virus may have reached its peak in the country.

The Delhi Chief Minister Mr Arvind Kejriwal said the national capital is past the peak of the second wave of COVID-19 and the situation has been largely controlled while union health secretary Mr Rajesh Bhushan said though peak and trends cannot be predicted but a decline in fresh cases in the last 14 days has been observed.

The average daily COVID-19 positivity rate has declined from 9.21 per cent recorded between September 16-22 to 6.82 per cent registered between September 30 to October 6 and ten states including Maharashtra, Karnataka, Kerala, Andhra Pradesh, Tamil Nadu, Uttar Pradesh account for 77 per cent of the active cases in the country.

The number of active cases in Maharashtra, the state that has recorded highest number of cases, are on a decline but are still high compared to September 8. “It is too early to talk about the trends in Maharashtra and we need to observe the state for some longer duration,” Mr Bhushan said.

New cases have come down in Andhra Pradesh too though in Karnataka and Kerala they continue to be on the rise. Mr Bhushan said that the rise in Kerala was noted during the week of Onam festival when intermingling of people was higher than usual. Keeping this in mind the government is apprehensive that in the coming festival days in north India if proper distancing and health protocols are not maintained, the cases can once again shoot up.

The union health ministry has accordingly issued standard operation procedure for festivals under which local administration has to ensure crowd density is less and crowds are regulated and managed to ensure physical distance and frequent sanitization.

“In case of rallies and immersion processions the number of people should not exceed the prescribed limit and proper physical distancing and wearing of masks must be ensured. In any case, the number of such rallies and the distance covered by them may be kept within manageable limits,” the SOP said. It added CCTV can be considered to monitor compliance of physical distance norms, wearing of masks at venue and in case of rallies and processions, route planning, identification of immersion sites, ensuring cap on numbers, physical distancing etc. must be planned beforehand and measures for enforcement outlined.

Health ministry officials said about 48 per cent of the total COVID-19 deaths in the country are concentrated in 25 districts of 8 states, out of which 15 districts are in Maharashtra alone. Two districts each are in Karnataka, West Bengal and Gujarat and one each in Tamil Nadu, Punjab, UP and Andhra Pradesh.

Meanwhile, Dr Reddy's Laboratories has been asked by an expert panel of the Central Drugs Standard Control Organisation to submit a revised protocol for conducting phase-2 and 3 human clinical trials in India for the Russian vaccine, Sputnik V. Dr Reddy’s had applied only for phase 3 trials but the CDSCO panel wants a combine of phase 2 and phase 3 trials saying the firm cannot directly conduct phase 3 trials. The Oxford vaccine too is undergoing phase 2 and 3 trials in India.