Rajnath Singh criticises Cong top leaders for not campaigning in HP, says have conceded defeat even before the results are announced. 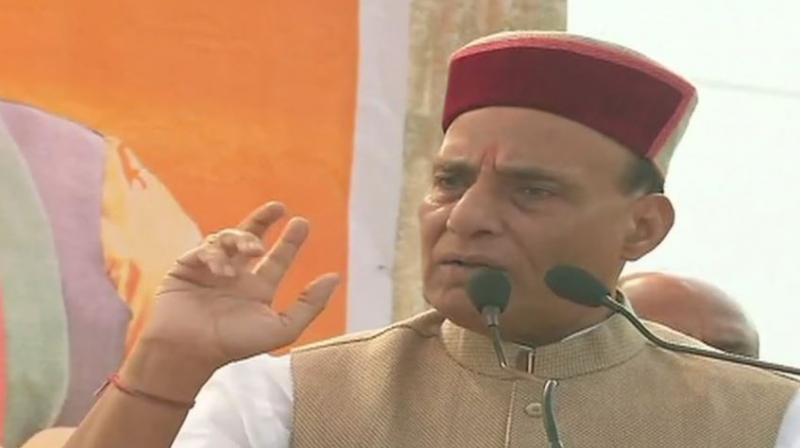 Singh confident the Congress will not return to power in Himachal Pradesh in near future.

Addressing an election rally here, Singh said, "We (BJP) believe that we must be in politics not only to form the government, but also, to build a nation."

He made this statement while criticising the Congress party which is ruling Himachal Pradesh.

The Union Home Minister reiterated that the Congress has already conceded defeat even before the results are announced.

"People tell me that the Congress has lost Himachal Pradesh even before the declaration of the result," Singh said.

The Himachal Pradesh Legislative Assembly election is scheduled to be held on November 9, 2017 and results will be declared on December 18.

Singh is not the first BJP leader who has made this claim.

Addressing a rally at Rait on Saturday, Prime Minister Narendra Modi also said the grand old party has backed off and accepted defeat even before the polling and results.

"During elections, generally the top leaders of the party campaign for their parties in the last phase of the campaign, but for the first time, Congress' central leaders have not come to Himachal Pradesh. They have accepted defeat. It also seems that they have left Himachal Pradesh Chief Minister Virbhadra Singh to his fate," Prime Minister Modi told a large gathering in district Kangra.

He also claimed the Congress will not return to power in Himachal Pradesh in near future.

The Gandhi scion alleged Prime Minister Modi believes in eating up the fruits of others' labour.

Also Read : Modi believes in eating up the fruits of others' labour: Rahul Gandhi

Ahead of assembly elections in Gujarat and Himachal Pradesh, Rahul has also been cornering the Prime Minister on demonetisation and the Goods and Services Tax (GST).

Since campaigning for the Himachal Pradesh Assembly elections ends on Tuesday, around a dozen top BJP leaders campaigned for the party on Monday.

In Himachal Pradesh, the BJP has named former chief minister Prem Kumar Dhumal as its chief ministerial candidate and the Congress is banking upon incumbent Virbhadra Singh who is facing court cases over corruption charges.

In 2015, the CBI filed a case against Virbhadra Singh and his family for owning assets disproportionate to his known sources of income when he was the union minister between 2009 and 2011. Cases have been filed against his wife Pratibha Singh, son Vikramaditya and daughter Aparajita as well.