'The attitude of suspecting everyone to be a thief or anti-national, low level rhetoric is damaging to democratic discourse,' he said. 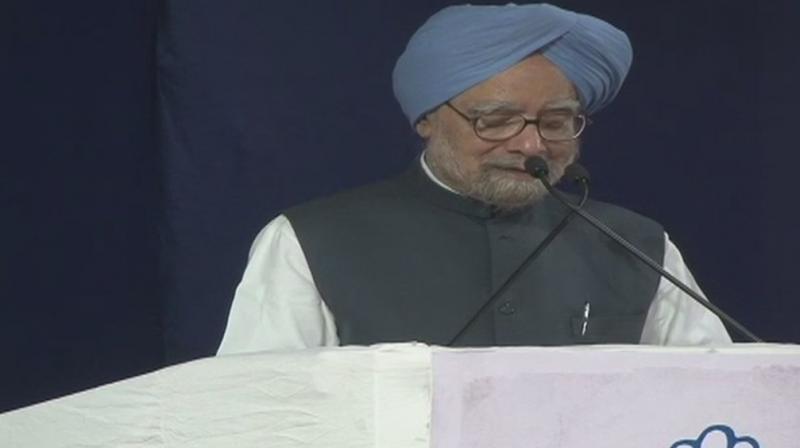 "By questioning bullet trains does one become anti-development? Does questioning GST & Demonetisation make one a tax evader?" he asked.

"This attitude of suspecting everyone to be thief or anti-national, low level rhetoric is damaging to democratic discourse," he said.

Interacting with a group of traders and businessmen at an event in Ahmedabad, reiterated his stance on the two policies, saying GST and demonetisation were "badly designed and hastily implemented."

Stating that demonetisation was "organised loot and legalised plunder", he said November 8, when Modi banned the Rs 1000 and old Rs 500 notes, was a black day for both economy and democracy

"Nowhere in the world has any democracy taken such a coercive step," Singh, who is also an economist, said. "Tomorrow (Wednesday) we mark one year since the disastrous policy was thrust on the people of our country," he added.

Intensifying the attack on the Centre, Singh said the NDA government’s so-called economic reforms, (GST and demonetisation), have only helped China since exports have surged this year.

"Unprecedented growth of imports by over Rs 45,000 crore, a 23 per cent increase in a year, can be attributed largely to demonetisation, GST," he added.

He said if Modi, while undertaking endeavour of 'one nation one tax', had taken inspiration from resolve of great Sardar Patel then the outcome would have been different.

Industries in Surat, Vapi, Morbi and other parts of Gujarat are badly affected by demonetisation and GST, he said.

Along with demonetisation, GST has created a deep rooted feeling of tax terrorism among businessmen and has broken the back of small traders in the country, Singh added.

The Congress has already announced that it will observe November 8 as 'Black Day' to protest the BJP-led government’s move.

Singh also attacked Modi over the bullet train project and said the launch was with much fan fare and was an exercise in vanity.

"Did PM consider alternative of the high speed train by upgrading broad gauge railway?" he asked.

Singh asked Modi if he considered an alternative of the high speed train by upgrading broad gauge railway.