For the first time in the nearly 3-decade old militancy in the State, an American M4 carbine colt rifle was found on the slain militants. 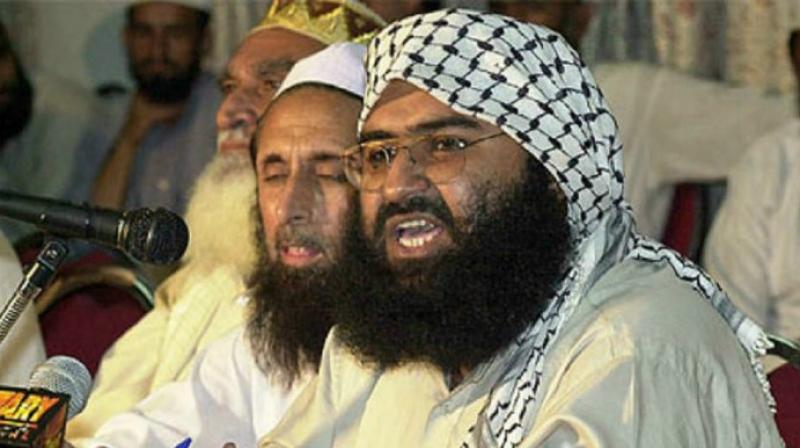 Srinagar: One of the three militants killed in a fire fight with the security forces in Jammu and Kashmir’s southern Pulwama district on Monday night is a nephew of Jaish-e-Muhammad (JeM) chief Moulana Masood Azhar.

For the first time in the nearly three-decade old militancy in the State, an American M4 carbine colt rifle was found on the slain militants besides a AK 47 Draco and a pistol along with live ammunition.

"We will ask them (Pakistan) to collect the body because they have owned it," he said adding, "The matter will be taken up through proper channels".

Khan said that a ‘divisional commander’ of the JeM was among the other two killed during the encounter. He was identified as Mehmood Bhai, also a Pakistani national.
Khan said that both Mehmood and Rasheed were ‘A-category’ militants. The third militant killed with them is Waseem Ganai, a local Kashmiri.

The IGP who was flanked by two senior officers of the Army and the CRPF confirmed that it is for the first time that American M 4 carbine colt rifle was found at an encounter site. The AK 47, however, remains the mainstay weapon with them, they said.

He said that police will launch a "thorough investigations" as to how this American weapon landed into the hands of the JeM militants.

"The matter as to how they acquired this weapons will have to be taken up with the concerned embassies through different channels. It needs a thorough investigation,” the IGP said.

The fire fight broke out in Pulwama’s Aglar Kandi village on Monday evening after the J&K police’s counterinsurgency Special Operations Group (SOG) along with the Army’s 44 Rashtriya Rifles and the CRPF’s 182 and 183 Battalions laid siege to it  "following credible leads" on the presence of the JeM militants there.

One Army jawan Vrahma Pal Singh was also killed during the clash whereas a civilian identified as Tariq Ahmed Bhat received a bullet injury as protests by locals broke out during the encounter. 30-year-old Singh, a resident of Shaujana Rani village in Bulandshahar district of Uttar Pradesh, was injured during the encounter and later succumbed at Srinagar’s 92-Base Army Hospital.

He is survived by his wife, two daughters and a 3-year-old son, defence spokesman Colonel Rajesh Kalia said. He also said that the mortal remains of the martyr were flown to his native place for the last rites.

While the police had said that the civilian was caught in cross fire during the encounter, the locals had alleged that he was "deliberately" targeted by the security forces during the protests.

The IGP confirmed that the locals had tried to disrupt the operation against the holed up militants.

"There was disruption by locals who threw stones (at the security forces). But we are fully capable of dealing with such situations," he said reiterating the appeal to the civilians not to try to disrupt the anti-militancy operations.

A local news agency GNS had earlier during the day said that JeM’s ‘divisional commander’ Mehmood Bhai along with Rasheed and another cadre Waseem Ganaie alias Tiger, a resident of Pulwama’s Drubgam village, were killed in the fire fight at Aglar Kandi on Monday night.

"Hassan Shah, the JeM spokesman, identified Masood Azhar's nephew as commander Talha Rasheed," it said while quoting from a statement issued by the outfit.

The statement also said that the "sacrifices" of the slain militants "won't go waste....One day, Indian forces have to leave Kashmir."

The police officials had said on Monday night that the militants’ group was involved in a sneak attack on a police naka party in Pulwama’s Rajpora area last week in which one police official Abdus Salaam was killed and another Munir Ahmed was injured.

The police sources here said that one of the three slain militants Waseem Ganaie is the same person whose photograph showing him holding an American M 4 carbine rifle had gone viral on social media recently.

Earlier reports had said that he was associated with Hizb-ul-Mujahedin. The photograph which surfaced on Facebook and some other social media sites on Thursday had been captured in an apple orchard somewhere in south Kashmir, the police had said.

The M4 carbine which is in the use of the US armed forces has replaced the M16 rifle. The police officials had said that the gun in the possession of the militant may have been smuggled from Pakistan.

The police and the Army confirmed M 4 carbine rifle was is the use of the militants. It said that apart from it one AK 47 rifle and one pistol along with live ammunition were found on the slain JeT men.

Major General B.S. Raju, General Officer Commanding (GOC) the Army’s ‘Victor Force’ said at the press conference, "We’ve recovered M4 carbine, a US made weapon used by NATO forces. This was first time that a US made weapon was recovered from militants in Kashmir."

He alleged that the weapon was given to the JeM militants but Pakistan army.

The police statement issued here on Tuesday said, "From the encounter site three weapons which include one AK 47 Draco rifle, one M4 carbine colt rifle and one pistol besides ammunition were recovered. It is pertinent to mention that this M4 carbine colt rifle was in the social media in the recent time."

Replying questions, IGP Khan said that there are 16 to 20 JeM militants still active in Kashmir Valley. He said that the J&K police with other security forces "is capable enough to get them."