Capable of carrying 24 kinds of war weapons, the missile is able to target multiple places simultaneously. 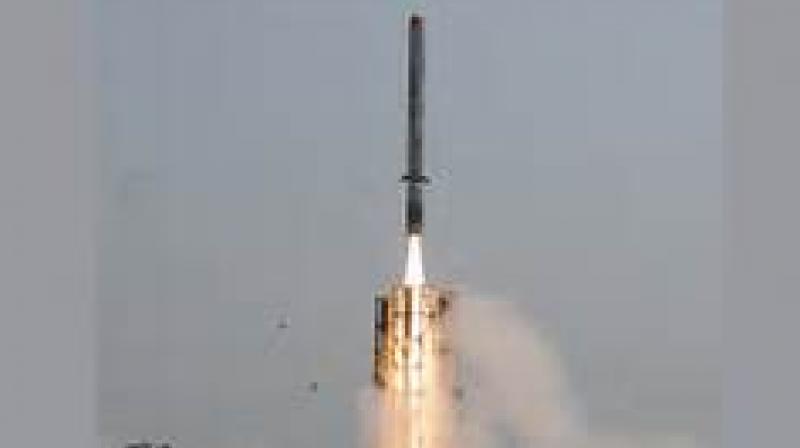 This test fire will continue for another three days while the final test will be done on November 9. (Photo: ANI)

This test fire will continue for another three days while the final test will be done on November 9.

"The indigenously-designed and developed missile with a strike range of 1,000 km was test launched from a specially-designed launcher at 10.30 a.m. earlier today from the launch complex-3 of the ITR, Defence Research and Development Organisation (DRDO)," sources said.

Nirbhay missile, with a turbo-fan engine, is guided by a highly advanced inertial navigation system. Capable of carrying 24 kinds of war weapons, the missile is able to target multiple places simultaneously.

"After the missile achieves a designated altitude and velocity, the booster motor is separated and the torfan engine automatically switches on taking over further propulsion," the DRDO sources added.

Mid-way in its flight, the missiles wings open up by the commands generated by the sophisticated on board computer for stabilising the flight path. The missile is tracked with the help of ground based radars and its health parameters are monitored by indigenous telemetry stations by team of professionals from DRDOs ITR and LRDE (Electronics & Radar Development Establishment).

The maiden test flight of Nirbhay was held on March 12, 2013 that had to be terminated mid way for safety reasons due to malfunction of a component, sources said. However, the second launch was on October 17, 2014 which was successful.

Following that, the next trial was conducted on October 16, 2015, which then had to be aborted after 20 minutes of its launch. The missile was also test fired last time in December, 2016. There were reports that the test had failed even though there was no official confirmation on the reports. All these trials were conducted from same defence base.

Coming to the features, the 'Nirbhay' missile is a six-metre long two-stage missile that can strike a target 1,000 km away. With a diameter of 0.52 m and wing span of 2.7 m, it weighs around 1,500 kg and can carry warheads up to 200 kg. Comparable with America's Tomahawk missile as far as the stealth capability, it can cruise at a speed of Mach 0.8.

Nirbhay can blast-off like a rocket and unlike a missile it turns into a vehicle akin an aircraft. Flying at tree-top level, it can deceive enemy radars making it difficult to be detected. Designed by the Aeronautical Development Establishment (ADE) and launched in 2004, the project is on an 18-month extension which expires in June 2018.