The senior Congressman also raised doubts over Modi's claim of making India a developed economy by 2022. 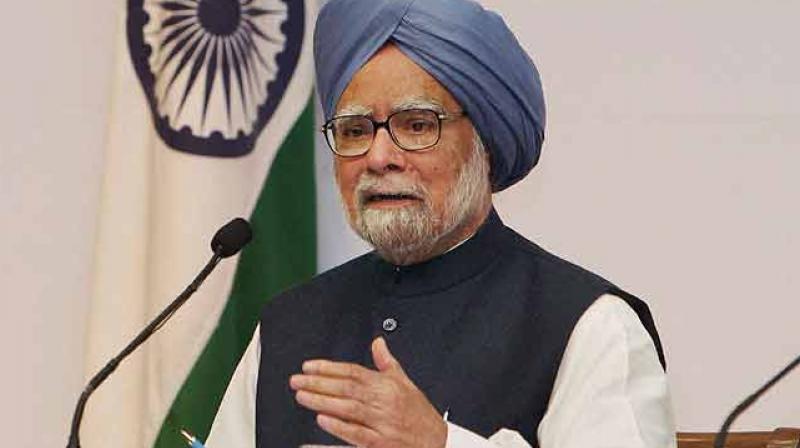 In a veiled attack on Modi's style of functioning, Singh said leaders should also listen to criticism to take corrective action, instead of just expecting praise. (Photo: PTI/File)

Ahmedabad: Taking a swipe at Prime Minister Narendra Modi over his promise of doubling farmers' income in five years, his predecessor Manmohan Singh said it would end up just being another election 'jumla' (rhetoric) as the government had no concrete plan to achieve the target.

Singh, addressing a press conference in Ahmedabad on Tuesday, said that in order to achieve the target of doubling farmers' income in five years, the agriculture sector needed to grow at a rate of 10 per cent.

He also slammed the Modi government, saying its "nice sounding slogans" such as 'Start up India, Stand up India' and 'Skill India' are not backed by effective policies.

In a veiled attack on Modi's style of functioning, Singh said leaders should also listen to criticism to take corrective action, instead of just expecting praise.

Modi has said that he dreamt of seeing farmers' income getting doubled by 2022 when the country completes 75 years of its Independence.

Singh said that the average growth of agriculture in the first three years of the Modi government "is only 1.8 per cent per year. This is half the average of agricultural growth of 3.7 per cent, which we have achieved in our ten years (of UPA rule)."

Stating that 50 per cent of the country's population is dependent of agriculture, the former prime minister said, "Modiji has given the slogan of doubling the farm income in
five years. Doubling it in five years requires an annual growth rate of farm incomes of 14 per cent."

"I do not know if doubling was meant to include the effects of inflation. If he was building in inflation at say four per cent, it still requires a growth rate of 10 per cent in real terms," Singh said.

"I have seen no programme that would achieve such a growth for the country's farmers as a whole. Perhaps, this is another election jumla (rhetoric). But, I feel that the government would be well-advised to come forward with a credible plan to achieve a growth rate of this order," Singh said.

While sharing his views on the negative effects of demonetisation, Singh also took a dig at Modi's other initiatives -- 'Start up India, Stand up India' and 'Skill India', saying there exists no policy in place to back these "nice sounding slogans".

"We have a number of nice-sounding slogans, such as Start up India, Stand up India... But, they are not backed up by effective policies on the ground. In fact, the policies should come first before the slogans invented to describe these policies. (But today) Slogans come first and efforts come much later. This is not helpful," said Singh, an eminent economist.

"I have spent a lot of time on demonetisation because it worries me that in a world, where economic policy is becoming increasingly complex, we are not developing a culture where policy option are critically-assessed and criticism offered are heard to take a corrective action," he said while expressing his views on the note ban.

"If leaders only want to be praised, they will hear nothing but praise. This is not a recipe for 'vikas' (development)," Singh said while referring to Modi's stress on development agenda.

The senior Congressman also raised doubts over Modi's claim of making India a developed economy by 2022.

"He was recently quoted in the press as saying that India will become a developed country by 2022. I would be the happiest person in the world if he can delivers (on) that.
But, is he really aware of what it implies?" Singh asked.

"To increase our income five fold in five years, we will have to achieve a growth rate of 35 per cent per year. No country has ever done this. Is Modiji promising he will do that?" Singh asked.