India   All India  07 Nov 2018  To honour India’s World War I heroes, new memorials in Europe, tributes at home too
India, All India

To honour India’s World War I heroes, new memorials in Europe, tributes at home too

In World War I, the British Indian Army sent seven Indian Expeditionary Forces to serve with the British Army & its Allies in various theatres of war. 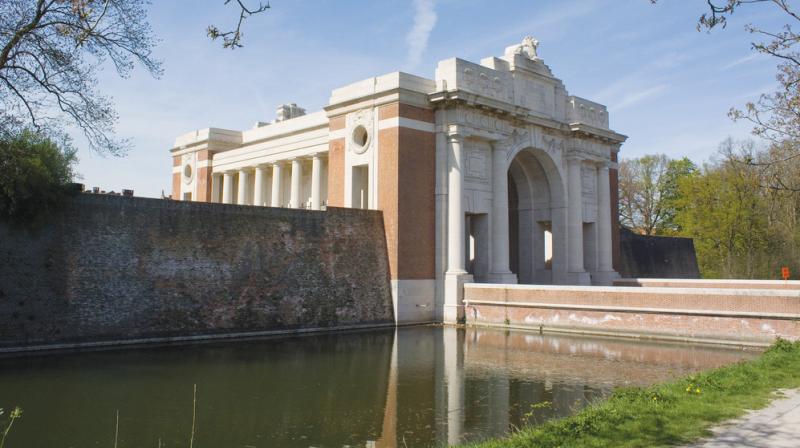 The Menin Gate Memorial to the Missing in Belgium.

In World War I, the British Indian Army sent seven Indian Expeditionary Forces to serve with the British Army and its Allies in various theatres of war. The total number of Indian troops and labourers were short of 1.5 million.

The bravery and sacrifices of Indian troops in this war were acknowledged by the armies and peoples of the Allied nations on whose soil they fought — to defend those countries — as being a decisive factor to the allied victory. 74,187 Indian soldiers were killed in this war. The outstanding valour by many Indian soldiers finally got acknowledged like never before by the British, who decided to bestow the coveted highest gallantry award in war — the Victoria Cross — to sepoy Khudadad Khan. That set a precedent and 11 more Indian soldiers were awarded the Victoria Cross in that war.

Seven war memorials dedicated to Indian troops killed in various operations in various countries during World War I were built within a few years after the war by the Commonwealth War Graves Commission (CWGC).

Two of them were built in New Delhi, India. The famous majestic India Gate has the names of the 74,187 Indian soldiers killed in various battles of World War I etched on all  of its walls. The second one in India was Teen Murti, recently re-named Teen Murti-Haifa Chowk,  and is a memorial to the Indian Cavalry Brigade which liberated Haifa. Accounts of valour of the Indian cavalrymen are mentioned in school history books for classes three to six in Israel.

In recent years, two more World War I memorials to Indian soldiers, the eighth and ninth ones, were constructed.

The eighth was at Menin  Gate, in Ieper, Belgium, named after the river Ipere which flows through it. Spelt by the French as Ypres, it was pronounced as Wipers by British troops. This memorial was inaugurated on 12 March, 2011.

The ninth one at Cambrai (pronounced Combray), France was constructed very recently. The Battle of Cambrai is best known for the Indian Army’s 9th Hodson’s Horse, which surprised the Germans by its rapid and unwavering advance under concentrated artillery fire and made a breakthrough in their defences. This very gallant episode was watched with great admiration by onlookers, because, for horse-mounted troops to advance in the face of heavy modern firearms requires the greatest courage and daring. Also in this battle, the very first of battle tanks manufactured then and named Big Willy, were used to make a safe lane through minefields.

The Menin Gate Memorial to the Missing, at Ieper, Belgium, has thousands of names inscribed of British, Irish, Australian and Canadian soldiers, but only about 400 names of Indian soldiers. To quote researcher and author Dominiek Dendooven, “In Flanders Field Museum, Ieper, the contribution of the Indians, though highly crucial, was largely underplayed.”

In 2001, at the request of the Government of India, a separate memorial stone was placed at the lawns on the ramparts of the Meningate Memorial. This was a Duhallow Block, a gravestone used by the CWGC to mark the “grave of  a number of persons who had no known resting place.”

On being posted to France as the Defence Attaché and also accredited to Belgium, Brig. (now Lt. Gen. retd.) Amit Sharma  first visited Ieper with his wife, Ms Renu Sharma in May 2008 and laid a wreath at the Indian Memorial. The Sharmas felt sad to see a mere gravestone as a memorial to over 9,000 Indian soldiers who had faced the first gas attacks at Ieper, prevented the city from being captured by the Germans and made the supreme sacrifice at “Flanders Fields”. Brig. Sharma decided that something had to be done. He discussed the issue with the local authorities and Indian Embassy officials. All felt that this was near impossible. It was like building a memorial of another country on the lawns of India Gate. Also, this would set a precedence and other countries too, would want to build their memorials at Menin Gate, which was neither desirable nor possible. But Sharma insisted and emphasised on the fact that it was the Indian soldiers who against all odds, including weather and gas attacks, had defended Ieper and prevented its capture by the Germans. A Duhallow Block was certainly not adequate nor  appropriate to honour their sacrifices.

It took nearly two years of protracted efforts with the Indian ambassador in Belgium and the Indian high commissioner in UK lobbying with the CWGC headquarters in London, to get the approval of the Flemish government. While the construction of  a new memorial was approved, it came with a strict caveat that the memorial would not be more than 180 cm high.  It was a major challenge to make something striking only about six feet high.

Ms Sharma, who had been accompanying Brig. Sharma during numerous trips to Ieper, suggested the Ashoka Emblem. With the assistance of the CWGC Head Office in London, Brig. Sharma managed to make this into a turnkey project through the CWGC so that payments could be made through that office which would also handle its maintenance thereafter. A sculptor of international repute was identified near Ieper. The monument would be carved out of local stone, with a guarantee of a thousand years. In frequent trips from Paris to Ieper, Ms Sharma would sit for hours with the sculptor, to get the emblem made to perfection.

Finally, on March 12, 2011, the Memorial was inaugurated in the presence of the Citizens of Ieper including veterans of World War II, Belgian Armed Forces officials and personnel of the Indian Embassy. It was a very proud moment for all the Indians present to salute the National Flag at the memorial with India’s National Anthem being played by the Belgian Army band.

The memorial to Indian troops at Cambrai, France was constructed recently. It was the brainchild of Maj. Karun Khanna (Hodson’s Horse, retd.) and his wife, who during their visit to the Cambrai battlefield in 2015, saw that there were memorials for the British, French and Canadian Armies for World War I, but none for the Indian Army. On return to India, Maj. Khanna began  efforts to initiate  action. Accordingly it was recommended to Lt. Gen. P.K. Singh and Sqn. Ldr. Rana T.S. Chhina, at the  United Service Institution’s Centre for Armed Forces Historical Research, who, in turn, approached the Army Chief Gen. Bipin Rawat. A ceremony to announce the construction of this memorial was held at Cambrai on  December 2, 2017 where  Anthony McClenaghan, BEM, Brig. Clive Elderton, CBE (retd), Sqn. Ldr. Rana Chhina, MBE (retd.), Brig. S.K. Sharma, military attache, Embassy of India, France and  Gerard Allart, mayor of Villiers-Guislain/Cambrai were present. Then in September 2018, Lt. Gen. Anil Bhalla (retd.), former colonel commandant of Hodson’s Horse visited France, where he was conducted by mayor Allart to the site at Cambrai where the memorial to Indian troops has been constructed.

The formal inauguration of this memorial, scheduled for November 10,  2018, will befittingly be by vice president of India, Venkaiah Naidu.

To mark the completion of 100 years of World War I, the British high commission, New Delhi, has planned some events from 9th to 11th November. A joint India-UK military band concert will be held at India Gate on  November 10th, followed by a reception at the British high commissioner's residence, when World War I diaries of Indian units will be presented to the Colonels of Regiments and  their  soft copy presented to defence minister Nirmala Sitharaman. On  November 11th, Armistice Day, a remembrance ceremony will be held at the Delhi War Cemetery.