A third militant surrendered before the security forces 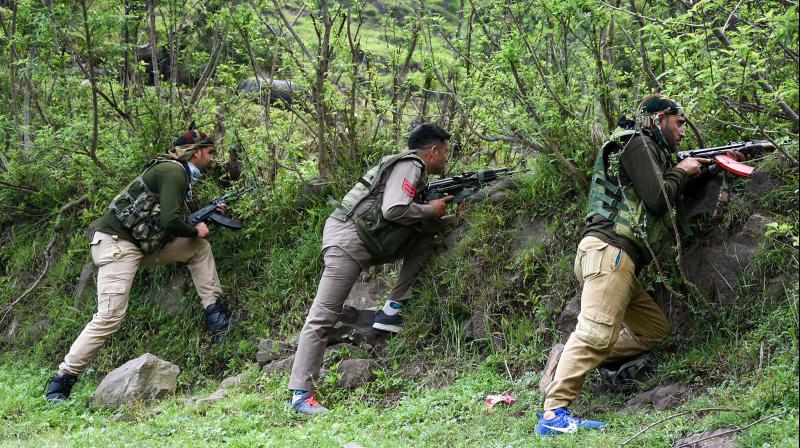 Srinagar: A fierce gunbattle which started between a group of militants and the security forces outside the Kashmir Valley’s highway town of Pampore on Thursday evening and continued through Friday left two suspected Lashkar-e-Tayyaba (LeT) militants and a civilian dead.

A third militant surrendered before the security forces before the latter mounted a final assault against his associates holed up in a private house in a cordon-and-search operation, officials said.

They said the operation was launched jointly by the J&K police’s SOG counterinsurgency unit, the Army’s 50 Rashtriya Rifles and the CRPF’s 110 Battalion in Lalpora Chatlam area of Pampore, about 20 km south of Srinagar, “on specific inputs regarding the presence of terrorists”.

In initial exchange of fire, two civilians were hurt. One, identified as Abid Ahmed Mir, succumbed to his injuries in hospital later. A statement by the J&K police here claimed the duo was hit after the militants fired “indiscriminately” and escaped from the place they were hiding in.

It said the militants were soon tracked again and given an opportunity to surrender. “However, they again fired indiscriminately at the joint search party, which was retaliated, leading to an encounter,” the police said. The operation was suspended due to darkness to avoid collateral damage, but the entire area was put under a strict cordon.

A heavy exchange of fire took place between the two sides at first light on Friday but before it the militants were again asked to surrender, a police spokesman said. He added one of the three militants, a local resident identified as Khawar Sultan Mir, responding to the appeal, laid down his arms and surrendered in an injured condition and was later evacuated to a hospital.

The officials said the two militants killed in the firefight appear to be Pakistani nationals. All of them were Lashkar members.

IGP (Kashmir) Vijay Kumar said Mir was the ninth militant to surrender so far this year, when over 200 militants were killed, including about a dozen senior commanders of terror outfits in clashes with the forces.