Neither the Speaker nor the Parliamentary Affairs Minister is running the House, BJP elder L K Advani said. 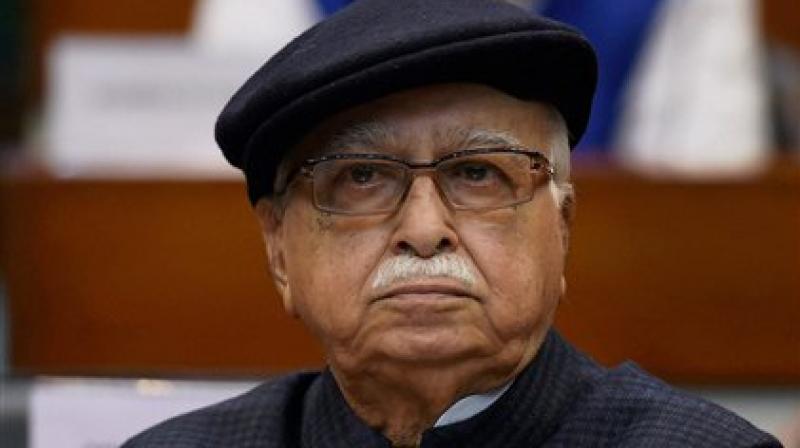 New Delhi: Exasperated at the repeated disruption of Parliamentary proceedings over demonetisation, BJP elder L K Advani on Wednesday blamed both the ruling and opposition benches for the deadlock, and even pulled up the Speaker and Parliamentary Affairs Minister for "not running the House".

After rare outburst by Advani, both the government and main opposition Congress, which is leading the protests in the two Houses of Parliament, tried to shift the blame for his anguish to each other.

"Neither the Speaker nor the Parliamentary Affairs Minister is running the House," he was heard remarking just before Lok Sabha was adjourned 15 minutes ahead of the lunch recess amid slogan-shouting by Congress and TMC members.

"I am going to tell the Speaker that she is not running the House. I am going to say it publicly. Both sides are a party to this," he said as Parliamentary Affairs Minister Ananth Kumar Kumar was seen pacifying the BJP stalwart.

Congress was quick to latch on to Advani's angry remarks, telling the government to pay heed to the "good advice" of the BJP veteran and get the Lok Sabha and Rajya Sabha going.

"L K Advani is a very senior leader of the BJP and has been in Parliament for a long time. BJP considers Advani ji as their 'margdarshak' and guru. I expect that the BJP is not hearing out the opposition, but at least BJP should hear out their 'margdarshak'," Congress spokesperson Sushmita Dev told reporters.

"I thank him. Advani has brought correct perspective to the whole issue. It is the responsibility of the government to make sure that maximum work is done during the session.

"Advani is one of the senior most Parliamentarians. We hope the government will take his good advice," she said.

Top Union ministers, however, attributed Advani's anguish to his anger with opposition parties and insisted they were to "blame" for the impasse.

Another senior minister Venkaiah Naidu said everybody was "sad" over the logjam but the opposition was not letting the House to function.

"What is their (opposition) strategy? Why are they going on this suicidal path, I am not able to understand. But the way Parliament is functioning, the people of the country are sad," he said.

He said while the opposition is saying they are not against remonetisation, they are at the same time not ready to discuss the problems faced by people, an issue they have been raising. They are also coming out and saying that they will not let the house function, he said.

"The people of the country are very happy. Instead of helping the people, solving the problem and moving the country towards digital transfer of money, they are trying to create panic in the society. That have failed in that as well. They are showing their frustration. That is contempt of Parliament and democracy," Naidu said.

The usually temperate Advani, while venting his anger, also pointed to the media gallery, apparently suggesting that his comments be reported.