O Pannerselvam breaks down as PM pays tribute to Jayalalithaa

As Mr Modi touched Sasikala on her head and consoled her, the confidante of the departed Chief Minister had tears in her eyes. 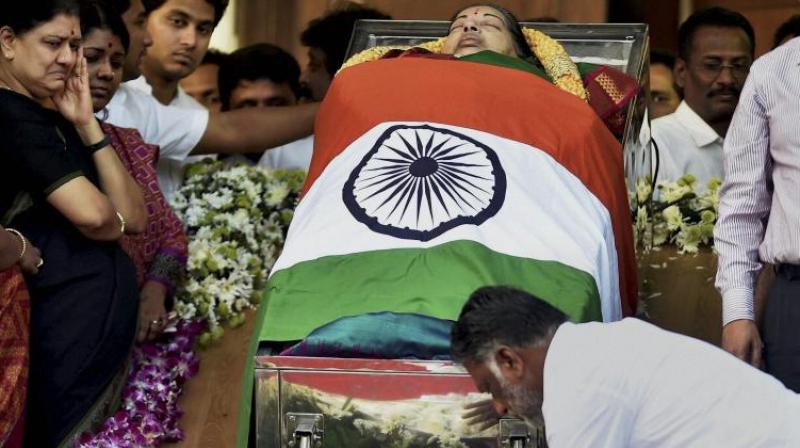 Heart-rendering scenes were witnessed as ‘grim-faced’ OPS, as he is known among party colleagues and cadre, almost hugged the Prime Minister and cried holding his hands. Immediately after placing a wreath on Ms Jayalalithaa’s body, Mr Modi walked towards Sasikala to console her.

As Mr Modi touched Sasikala on her head and consoled her, the confidante of the departed Chief Minister had tears in her eyes. As he turned the other side, he saw Mr Pannerselvam and held his hands. As emotions ran high, the Chief Minister almost hugged the Prime Minister and broke down. The Prime Minister, after consoling Mr Pannerselvam, also extended his condolences to Lok Sabha Deputy Speaker M Thambidurai and AIADMK floor leader in Rajya Sabha, A Navaneethakrishnan.

After offering condolences to party ministers and leaders, the Prime Minister left the Rajaji Hall and took his flight back to New Delhi. And Sasikala was the cynosure of all eyes as she stood near Jayalalithaa’s body the whole day and every visiting dignitary held her hands and extended their deepest condolences.

President Pranab Mukherjee also spoke to Ms Sasikala and consoled her. While he was leaving, Acting Governor CH Vidyasagar Rao introduced Mr Pannerselvam to the President, who offered his condolences to him as well.
A majority of the Chief Ministers of other states, who visited the Rajaji Hall, made it a point to meet Mr Pannerselvam too.