Incidentally, Jayalalithaa had twice fallen out with Sasikala a few years ago for alleged anti-party activities, but they patched up soon. 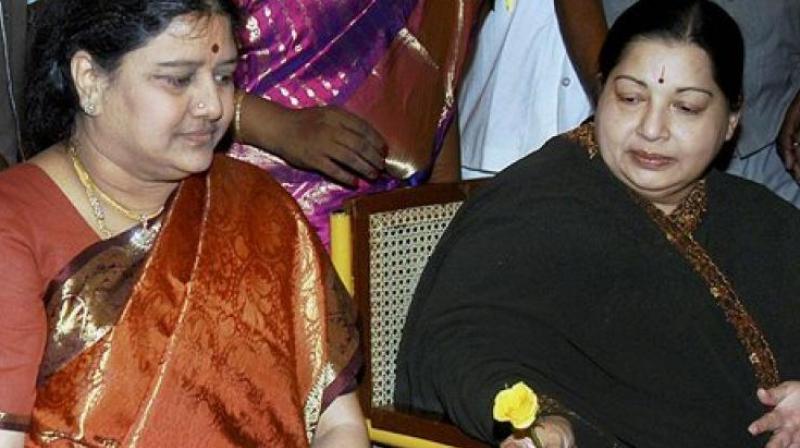 According to a report in The Telegraph, Jayalalithaa had drawn up a will two years ago, which states that the Poes Garden house goes to Sasikala. The Kodanad estate in the Nilgiris, Jaya Publications, Sasi Enterprises and the other businesses in which the two friends were partners will also go to the surviving partner. The Hyderabad farmland goes to Vivek Jayaraman, son of Ilavarasi and Jayaraman (Sasikala's brother), said the report.

According to Jayalalithaa’s election affidavit filed in April this year, the AIADMK supremo had assets worth Rs 113.73 crore. Out of which movable assets are worth Rs 41.63 crore and immovable properties valued at Rs 72.09 crore. Jaya had Rs 41,000 cash in hand and Rs 2.04 crore as liabilities.

She owned 14.50 acres of farm land in Jeedimetla village in Ranga Reddy district in Telangana and 3.43 acres in Cheyyur Village in Kancheepuram village in Tamil Nadu. She had purchased the property in Telangana in 1968 along with her mother Sandhya and the Cheyyur property in 1981.

Jayalalithaa had two Toyoto Prado SUVs, together valued at Rs 40 lakh. Also, she had a Tempo Traveller, a Tempo Trax, a Mahindra Jeep, an Ambassador car of 1980 make, a Mahindra Bolero, a Swaraj Mazada Maxi, and a Contessa (1990 model) and the vehicles are together worth Rs 42,25,000.

59-year-old Sasikala had come in contact with Jayalalithaa in the 80s as a video company owner, getting the leader's various events covered.

Hailing from a humble background from Mannargudi in south Tamil Nadu, 'Chinnamma' as Sasikala was known in her circles gradually gained acceptance in the Veda Nilayam residence, and even wielded influence in AIADMK at one point of time.

Sasikala would usually be seen seated in the rear seat of the vehicle, merely watching Jayalaithaa's electoral addresses, and providing her 'akka' (sister) with assistance.

The relationship between the two had kicked up many a storm during Jayalalithaa's three decades of political career with some blaming her proximity to Sasikala for the AIADMK's electoral defeats on some occasions.

Both were accused in the infamous disproportionate assets case and were convicted by a trial court in Bengaluru, though the Karnataka High Court later reversed the lower court order.

Incidentally, Jayalalithaa had twice fallen out with Sasikala a few years ago for alleged anti-party activities. She and some of her family members had been expelled from the party and asked to vacate Jayalalithaa's Poes Garden residence. However, the separation between the two was short-lived as they patched up in no time.