Two jawans killed in Pakistani firing on LoC in J&K

It was not immediately known if the Pakistani Army also suffered any casualties in the Indian fire. 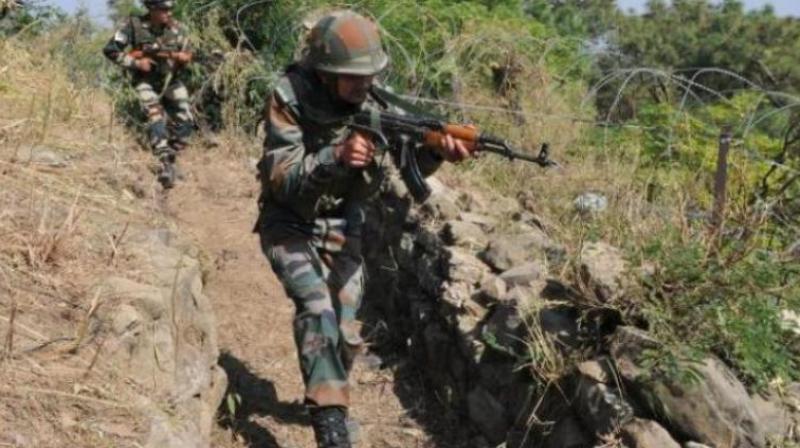 The report said that two forward locations along the LoC manned jointly by the Army and the BSF came under fire from across the de facto border at 3.50 pm on Thursday. (Representational image)

Srinagar: One Army and one Border Security Force (BSF) jawan were killed and another Army jawan was injured in Pakistani firing in Machil and Sunderbani sectors of the Line of Control (LoC) in Jammu and Kashmir on Thursday.

Defence spokesman Col. Rajesh Kalia said here that the Pakistani troops resorted to “unprovoked” firing at the Indian forward posts in Machil sector at around 10.45 am on Thursday.

“Our troops retaliated to the unprovoked Pakistani firing strongly. One soldier was martyred in the enemy fire,” he said.

It was not immediately known if the Pakistani Army also suffered any casualties in the Indian fire.

The exchange of fire was also reported from Kamalkote area of Uri sector in neighbouring Baramulla without any casualties taking place on either side though. A report from Muzaffarabad said that the Indian firing caused fear and panic among the border-dwellers. A similar situation prevailed on the Indian side of the de facto border, the police sources in Srinagar said.

A report from Rajouri in Jammu region said that a BSF jawan Para-njit Biswas was killed and another was critically injured in cross-LoC firing in the district’s Sunderbani area.

The report said that two forward locations along the LoC manned jointly by the Army and the BSF came under fire from across the de facto border at 3.50 pm on Thursday.

The Army and the BSF retaliated to the Pakistani firing “effectively”. However, two jawans of the BSF’s 126 Battalion were critically injured and one of them Constable Biswas succumbed to his injuries later, said a BSF official.

On Wednesday, two Indian Army personnel were injured in the Pakistani fire in the Uri area. The Army officials here said that the Indian troops returned the fire by using same calibre weaponry.

The police sources said that the two armies traded small arms and mortar fire near Nanak Post in Kamalkote and at nearby Rani Shanker Post around 5.30 pm on Wednesday, injuring two Indian soldiers. A residential house and a tin-shed belonging to one Hakim Ali were damaged in the Pakistani shelling at Batar Kindibarja in Kamalkote area, the police said.

The area witnessed exchange of fire again between 9 30 am and 11 am on Thursday, the reports received here said. Defence spokesman alleged that the firing was initiated by the Pakistani troops “without any provocation from own side”. He added, “Our troops gave befitting reply to the ceasefire violation of Pakistan.”

In the aftermath of the fresh clashes, the cross-LoC trade was suspended at Uri-Chakothi corridor on Thursday “as a precautionary measure,” the officials here said. Uri’s Sub-district Magistrate (SDM), Baseer-ul-Haq said that since the shelling was taking place close to the Kaman Post crossing point it was decided to suspend the movement of trucks carrying merchandise between the two sides.

The official said that the trade activities through Uri-Chakothi corridor will be resumed as and when the situation becomes normal and there is no threat to truckers carrying the goods. Truck service between the two parts of Jammu and Kashmir through Uri-Chakothi was rolled out in 2008 after India and Pakistan agreed to allow traders from both the sides to exchange listed goods on barter system.