Wide popular support for police; but some ask: ‘Is this how justice is done?’ 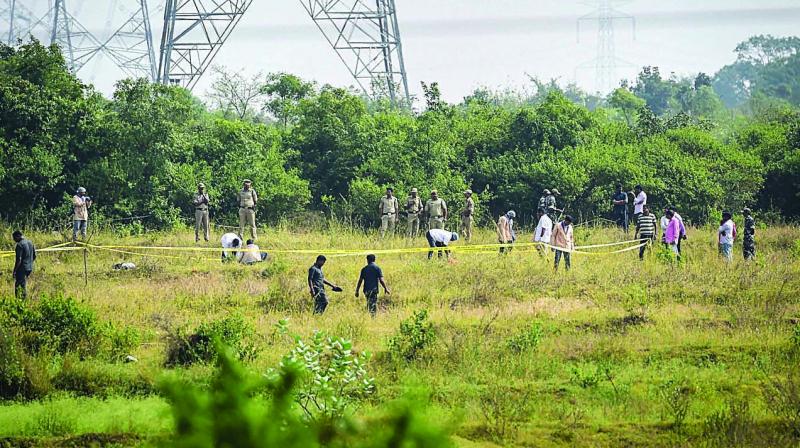 Forensic experts collect evidence from the spot where the police shot dead four accused in the rape-and-murder case of a 25-year-old woman veterinarian at Shadnagar of Ranga Reddy district on Friday. The Telangana police on Friday said its personnel resorted to “retaliatory” firing after two of the accused opened fire at police after snatching weapons from them on Friday morning. (Photo: PTI)

Hyderabad: The four accused in the case of gangrape and murder of 27-year-old veterinarian Disha were reportedly killed following a shoot-out with the Cyberabad police on the outskirts of Chattanpally village, around 50 km from the city, during early hours of Friday.

Two policemen were injured in the alleged attack. The police claimed that the encounter took place after the accused snatched weapons from the police party and opened fire at the personnel.

The deceased — Mohammed (26) alias Areef of Jakkulare, and J Shiva (20), J Naveen (20) and C Chennakeshavulu (20), all of Gundigandla village in Makathal mandal of Narayanpet district — were arrested for Disha’s gangrape and murder while she was on her way home.

The encounter happened in agricultural fields alongside NH 44, just about 250 metres from the spot where Disha’s charred body was found.

Police took custody only on December 4 and questioned them at a secret place for two days. On the third day, they were reportedly taken to collect evidence from the crime-scene. The accused overpowered the police, attacked them with sticks and pelted stones, snatched two pistols and opened fire. In retaliation, the police also opened fire and the four accused died on the spot.

“A team of 10 took the accused in two vehicles to the crime spot,” he said. “The four tried to mislead the police about where they buried Disha’s belongings and gathered together. They snatched pistols from two policemen and attacked with stones and sticks.”

Even after repeated warnings, they refused to surrender and opened fire. The team had to retaliate.

In the attack, two policemen — sub-inspector K. Venkateshwarlu and police constable Aravind Goud of Nandigama police station were injured on their head and arm, respectively. They were admitted to Care Hospital and are out of danger, he said.

“The police party warned them to not open fire,” the commissioner said. “But, Mohammed and Chennakeshavulu, who grabbed the pistols, fired at the police and police returned fire. After a lull, the police team found the accused dead.”

Commissioner Sajjanar said that a case would be registered for a probe. The deceased’s bodies were taken to Mahabubnagar government hospital mortuary for the post-mortem and will be handed over to their families.