The responses most loved were those that sought more violence. 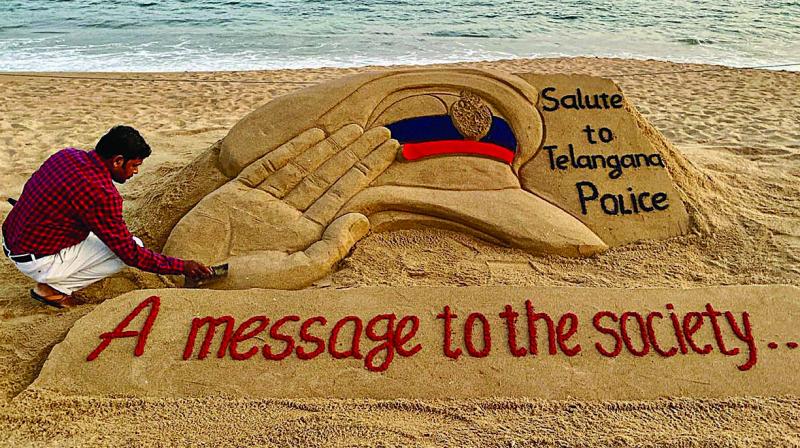 Sand artist Sudarshan Pattnaik creates a sculpture at a beach in Puri to commend the Hyderabad Police for its action against the four gangrape accused on Friday. (Photo: PTI)

HYDERABAD: On Facebook, armchair activism and pent-up outrage of over a week transformed Friday morning, and erupted into a euphoric celebration of bloodlust.

Middle-class people, parents, women, lawyers, engineers, doctors, youth, even senior citizens with grandchildren came together, cutting across their differences of preference over iOS and Android, celebrated in unison an encounter in which four accused in Disha rape and murder case were killed early morning on the city’s outskirts by Telangana police.

“Last night, was having a discussion that no action had still been taken by police. I feared this would end up like Nirbhaya case. But when I got up in the morning, I heard all four accused were encounter-ed. I got up with a big smile. I couldn’t tell how happy I was. As a girl, it was heart-breaking to have read about the brutual crime. I have been telling my sisters, these criminals should be taken to same spot and be burnt alive. What happened was karma. Proud of my Telangana Police. Most people applaud our Chief Minister K Chandrashekar Rao. Encounter or planned killing, what they did was simply amazing. I hope and pray that we will see such heinous crimes again. #NotInMyCountryAgain #HatsOffTelnaganaPolice #JaiKCR,” wrote Pari Nidhi, Telugu cine actress.

Posts celebrating the police action in Hyderabad spread faster than a late stage cancer, trending, flooding any dissent with a menacing putdown, perhaps friends were unfriended, and blocked, but the most liberal amongst the encounter-supporters just gently told all naysayers to go to the opposite of heaven.

The photos of ladies on the encounter spot, tying rakhis to trigger-happy policemen were shared with encouraging virtual pats on the khakhi shoulders.

The responses most loved were those that sought more violence.

“This was a very easy death. They should have been given more pain before death. Right choice of justice. No court, no bail, no mercy petitions any longer. No human right activist should be allowed to raise any issue or they too should face same fate. Well done, Hyderabad police,” told a lady to a man who raised “technical legal points like should cops kill?”

“I will celebrate tonight. Join me, brothers and sisters. #DayJusticeWas Done,” posted a happy proud citizen. There will be much celebration there, at least as FB promises goes.