India   All India  07 Dec 2019  Indian Army hands over mine detection dogs to Bangladesh ahead of VIjay Diwas
India, All India

30 Mukti Yoddhas from Bangladesh and 21 war veterans of the Indian armed forces would participate in this year's Vijay Diwas. 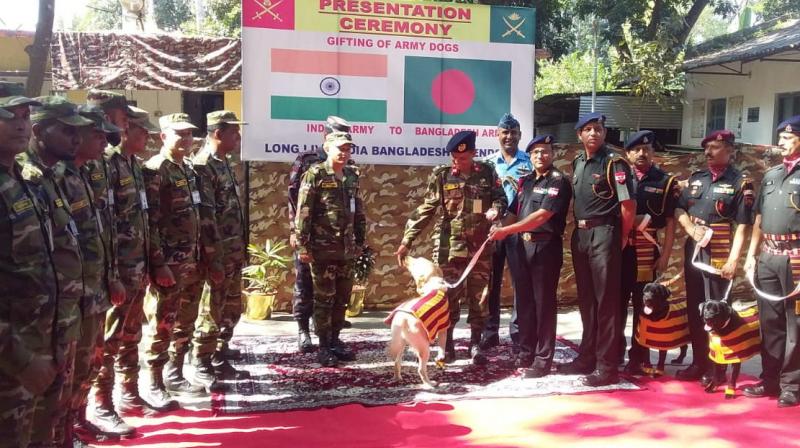 The dogs have been trained at the Remount Veterinary Centre, Meerut. (Photo: File)

Kolkata: The Indian Army on Saturday handed over the first batch of explosive detection dogs to the Bangladesh Army as the two countries are gearing up to celebrate 48th anniversary of Vijay Diwas commemorating the victory over Pakistan in the Liberation War of 1971.

The first batch of ten mine detecting dogs was handed over by Indian Army to Bangladesh Army at Petrapole Check Post in North 24 Parganas in West Bengal, the Eastern Command.

The dogs have been  trained at the Remount Veterinary Centre, Meerut.

At the Eastern Command Headquarters: Fort William, Major General N D Prasad, Major General General Staff, informed that 30 Mukti Yoddhas from Bangladesh and 21 war veterans of the Indian armed forces would participate in this year's Vijay Diwas which will be held in the city from December 13 to 16.

The 30 Mukti Yoddhas will be accompanied by six Bangladesh armed forces officers. Maj Gen Prasad said, "Vijay Diwas epitomizes the resolve of our nation and the valour of our men in uniform many of whom made the supreme sacrifice in the true traditions of the Armed Forces. This great military achievement would not have been possible without the help and support of the Mukti-Jodhas and the population of Bangladesh who made immense sacrifices and had to bear inhuman deprivation and sufferings during the war."

He added, "Eastern Command has traditionally been celebrating this day as a mark of respect to the fallen heroes of the Indian Armed forces and Mukti-Jodhhas who made this victory possible. This day is celebrated as a day of remembrance of those who sacrificed their lives during the 1971 Liberation War of Bangladesh."

The celebrations which will start with a military band concert on December 13 and 14 at Princep Ghat and military tattoo on December 14 and 15 at the RCTC grounds, Red Road Marathon on December 15, would culminate on December 16 by the wreath-laying at Vijay Smarak in Fort William.