The NHRC team would later go to Mahbubnagar Government hospital where the bodies of the four accused are kept. 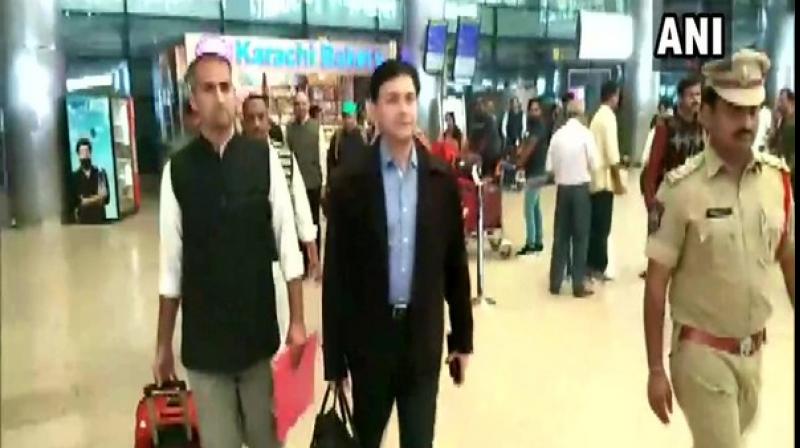 Taking suo motu cognisance of the killing of the four accused, the NHRC said that this matter was required to be probed very carefully. (Photo: ANI)

Hyderabad: A team of the National Human Rights Commission (NHRC) arrived here on Saturday a day after all the four accused in the rape and murder of a woman veterinary doctor in Telangana were killed in a police encounter.

The NHRC team would first visit the encounter site at Chatanpally village to conduct an inquiry where the encounter took place on Friday and then go to Mahbubnagar Government hospital where the bodies of the four accused are kept.

On Friday, the NHRC has asked its Director General (Investigation) to send a team for fact-finding on the spot investigation into the matter. It said the encounter indicates that the "police personnel were not properly alert and prepared for any untoward activity" by the accused on the spot, which resulted in the death of all four.

Taking suo motu cognisance of the killing of the four accused, the NHRC said that this matter was required to be probed very carefully.

"Death of four persons in an alleged encounter with the police personnel when they were in their custody, is a matter of concern for the commission," the Commission said.

The accused - Mohammed Arif, Naveen, Shiva and Chennakeshavulu - were killed in a police encounter at Chatanpally, Shadnagar in the wee hours on Friday, between 3 am and 6 am, Cyberabad Police Commissioner V C Sajjanar said.

"If the arrested persons were actually guilty, they were to be punished as per law pursuant to the directions of the competent court," the Commission said.

Police said that the veterinarian was brutally raped and killed by the accused who burnt her body in the Shamshabad area on November 27. Her charred body was recovered on November 28.