'There is reason for breakdown of our institutional structures, reason that people are taking law into their hands,' Gandhi said. 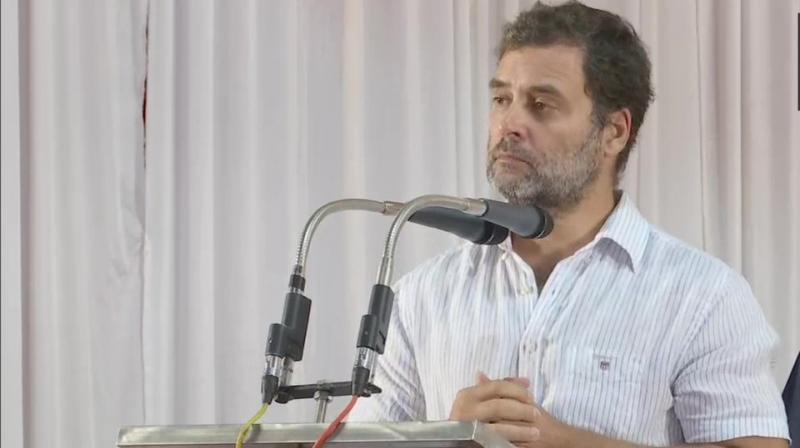 He was speaking at an event to celebrate the Armed Forces Flag Day celebrations in his constituency Wayanad. (Photo: ANI)

Addressing in Kerala, Rahul said: “You have seen the increase in violence across the country, lawlessness and atrocities against women. Every day we read about some woman being raped, molested and thrashed. There is violence against minority communities, hatred is being spread against them. There are reports of violence against Dalits, of thrashing them, cutting off their arms. We also hear about atrocities against tribals, and snatching of their land.”

“There is a reason for this breakdown of our institutional structures, a reason that people are taking law into their own hands. It is because the man who is running this country believes in violence and indiscriminate power,” Gandhi added.

He was speaking at an event to celebrate the Armed Forces Flag Day celebrations in his constituency Wayanad.

His remarks came amidst nationwide outrage over rape and killing of a veterinary doctor in Telangana and a 24-year-old in Uttar Pradesh’s Unnao. All the four men accused of raping and murdering the veterinarian were killed in an encounter on the outskirts of Hyderabad on Friday early morning.

The UP government, meanwhile, is facing flak from the Opposition over the death of Unnao rape victim, who was set on fire by five men, including those who raped her. She was air-lifted to Delhi after the attack on Thursday and died of a cardiac arrest while being treated in a city hospital.

Chief Minister Yogi Adityanath said the Unnao incident was “extremely sad”. He also said that the case would  be taken to a fast-track court, and strict punishment would be given.