The Supreme Court had diluted certain provisions in the Act, but the BJP government restored them by passing a Bill in the Parliament.

New Delhi: In the run-up to Lok Sabha elections, the Narendra Modi Cabinet on Monday proposed a landmark 10 per cent quota in government jobs and higher education for the poor among the general category. The move, which requires a constitutional amendment, was hailed by the BJP as “historic” but dismissed as a “gimmick” by most Opposition parties, including the Congress. The proposal is being seen as a “game changer” that will woo the economically weaker sections (EWS) among the upper castes, the backbone of the BJP’s vote base. Upper castes have been upset with the Modi government ever since it restored stringent provisions of the SC/ST (Prevention of Atrocities) Act. The Supreme Court had diluted certain provisions in the Act, but the BJP government restored them by passing a Bill in the Parliament.

The proposal for upper caste quota was approved in a Cabinet meeting chaired by Prime Minister Narendra Modi with a plan to introduce a constitutional amendment Bill in Lok Sabha on Tuesday, the last day of Winter Session, and seeking extension of Rajya Sabha proceedings by a day for taking up the Bill on Wednesday.

Sources disclosed that Rajya Sabha chairman M. Venkaiah Naidu has agreed to the government’s request and extended the Upper House’s proceedings by a day.

The amendment Bill is required as the Constitution does not provide for reservation on the ground of economic conditions. The Bill envisages amendment to Articles 15 and 16 of the Constitution and it will need support of at least two-thirds of the members in both the Houses for passage.

Among the major castes to benefit from the proposed law are Brahmins, Rajputs (Thakurs), Jats, Marathas, Bhumihars, se-veral trading castes, Kapus and Kammas among other upper castes. It would also benefit the poor in other religions like Christians and Muslims. 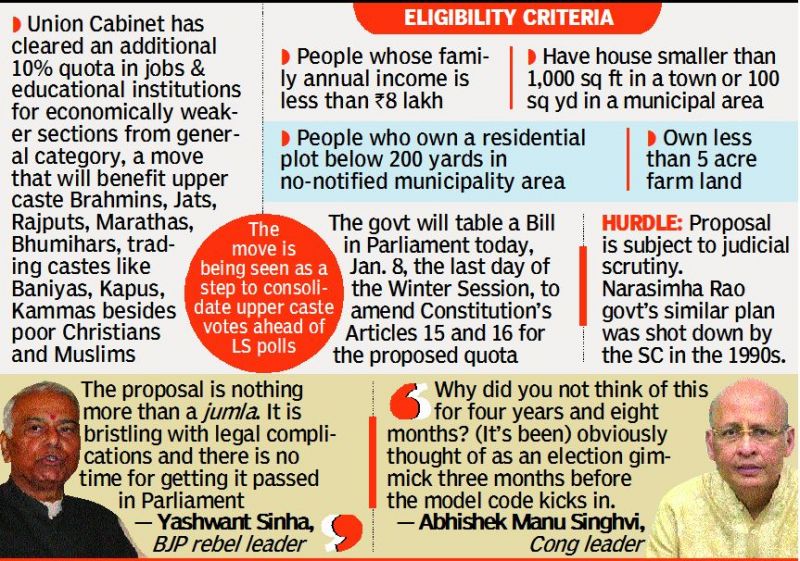 Sources said the eligibility criteria for availing the proposed EWS category quota would include a condition that families should have an income, including agricultural and from profession, below `8 lakh per annum, possess agricultural land below five acre and residential house below 1,000 square feet. Beneficiaries in urban areas would include those with residential plot below 100 yards in notified municipality or residential plot below 200 yards in the non-notified municipal area.

Union minister Vijay Sampla said, “This was a long-standing demand but only the Modi government had the courage to do it. Brahmins, Baniyas, Christians, Muslims, all will benefit from this.”

The minister of state for social justice and empowerment said that the decision should not be seen as political as it is “the government’s duty to understand the feelings of the people and fulfil their needs”.

The government’s 10 per cent quota proposal seeks to meet a long standing demand of the upper castes, BJP’s core vote bank, which had shown signs of drifting away over the ruling party’s aggressive wooing of the OBCs and dalits. The move is also being seen as a step to consolidate upper caste votes ahead of Lok Sabha polls around May.

The proposal comes in the backdrop of an upper caste backlash against its move against the Supreme Court’s attempt at ring-fencing apprehensions of misuse of SC/ST Prevention of Atrocities Act. The Supreme Court move had sparked nation-wide protests from dalit groups after which the Modi government brought a legislation and nullified the apex court measure through Parliament in the last Monsoon Session.

The upper caste communities, in turn, voiced their protest over the government’s alacrity in addressing the concerns of dalit communities of the issue.

On Monday, BJP hailed the Cabinet decision as “historic”, the Congress described it as an “election gimmick” and accused the BJP of posturing ahead of the national elections. However, the Congress said that it will support the Bill.

Within the BJP, which recently faced massive electoral drubbing in key states, the move was hailed as the “mother of all political moves” and a “game changer” as anger among the upper castes against it was one of the main reasons for its loss in Madhya Pradesh, Rajasthan and Chhattisgarh.

Though the upper castes constitute not more than 15 per cent of the total population, their support is considered crucial for the BJP. Reservation for the EWS was a key demand of the RSS as well.

Amid indications that retaining power at the Centre is going to be tough for the BJP, the move is seen as a “game changer” by its poll managers who feel that the party leadership has sent a “strong positive message” to its core votebank and it will not be politically viable for the Opposition parties to object to it.

Sources disclosed that the government was working on this issue for more than a month and atleast two Cabinet ministers had been fastidiously working for the past four days with the PMO on the nitty gritty of the constitutional amendment Bill on 10 per cent to be tabled on Tuesday.

“The Bill will provide a shelter for upper castes under the rubric of fundamental rights. The court’s rule of the maximum 50 per cent quota cannot fetter Parliament’s right to amend the Constitution,” said a Union minister adding that the proposed legislation will provide “constitutional recognistion to the deprived and marginalised poor among the upper caste”.

The Supreme Court had set a cap of 50 per cent on quotas in the Indra Sawhney judgment and the Modi government’s proposed constitutional amendment will pave the way for the additional 10 per cent quota.

Influential castes like Marathas, Kapus and Jats have hit the streets in the last few years, seeking reservation benefits. Their protests at times have turned violent.

Though governments in states like Haryana, Rajasthan and Maharashtra have made laws, they are often struck down on the ground of the Supreme Court’s Indra Sawhney judgment.

Terming the decision as “historic”, BJP ally Lok Janshakti Party (LJP) said that the poor are a group in themselves and should never be discriminated on the ground of castes.

The Congress called the Modi government’s decision as a proof of the BJP’s “fear” of losing Lok Sabha polls.

Union minister Ramdas Athawale, a leader of BJP’s ally Republican Party of India (Athawale), described the decision as a masterstroke which could end the difference between the upper and lower caste.

Bihar chief minister Nitish Kumar-led JD(U), a BJP ally welcomed the government’s decision and said the move will bring economically backward sections of upper castes in the mainstream of development.

Congress chief spokesperson Randeep Surjewala said that “without jobs”, creation of reservation in employment may just prove to be “one more jumla”. He however, added that the Congress has always backed every step for reservation and extended support to the economically poor sections of society irrespective of caste, community or creed.

Another Congress leader, Abhishek Manu Singhvi, questioned the Modi government, “Why did you not think of this for four years and eight months? So obviously thought of as election gimmick three months before the model code.”

Rebel BJP leader Yashwant Sinha said that the proposal is nothing more than a ‘jumla’. “It is bristling with legal complications and there is no time for getting it passed in Parliament,” he said.