'We understand the external affairs minister is out of country and the PM is leaving for UAE during the week,' the Maldivian envoy said. 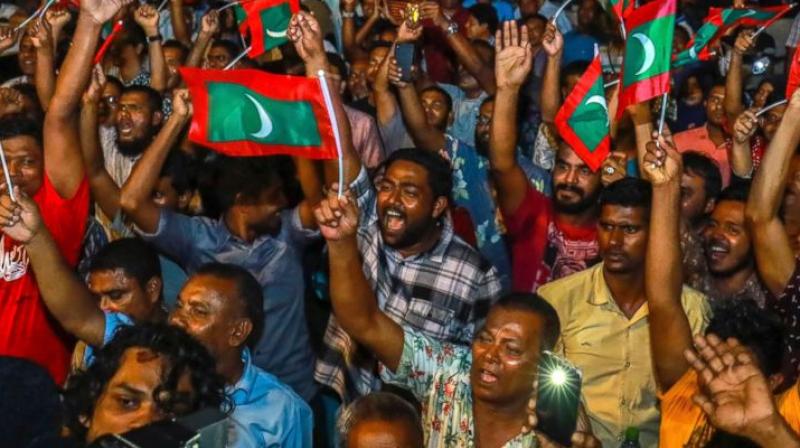 The envoy's comments come in the backdrop of Maldivian President Abdulla Yameen sending special envoys to China, Pakistan and Saudi Arabia to brief them about the deepening political crisis in the country. (Photo: AP)

New Delhi: India was the first stop planned for a visit by a special envoy of the Maldivian president but it could not take place due to scheduling issues of the Indian leadership, the island nation's envoy said on Thursday.

"India was in fact the first stop planned and proposed for a visit of a special envoy of the president of Maldives. However, the dates proposed were not suitable for the Indian leadership," Maldivian envoy Ahmed Mohamed said.

His comments come in the backdrop of Maldivian President Abdulla Yameen sending special envoys to China, Pakistan and Saudi Arabia to brief them about the deepening political crisis in the country.

"We understand the external affairs minister is out of country and the prime minister is leaving for UAE during the week," he added.

The Maldives Ambassador said they had even inquired if their foreign minister could meet a minister of state for foreign affairs.

We are hurt... We are reaching out," he told NDTV.

"We would want India to do even more than China... as we are neighbours...," Mohamed said.

President Yameen has sent Minister of Economic Development Mohamed Saeed to China and Foreign Minister Mohamed Asim to Pakistan in the wake of the crisis.

Read: In a rebuke to China, ex-Maldives president urges India to act as 'liberators'

Minister of Fisheries and Agriculture Mohamed Shainee is going to Saudi Arabia.

The island nation, which has seen several political crises since the ouster of its first democratically-elected president Mohamed Nasheed in 2012, plunged into chaos on Thursday when the apex court ordered the release of nine imprisoned opposition politicians, maintaining that their trials were "politically motivated and flawed".

India, which is monitoring the situation very "closely", said on Tuesday that it was "disturbed" about the declaration of emergency by the Maldivian government and described as a matter of "concern" the arrests of the chief justice and political figures there.