'We have a new Congress president and on your behalf and my own I wish him all the best', said Sonia. 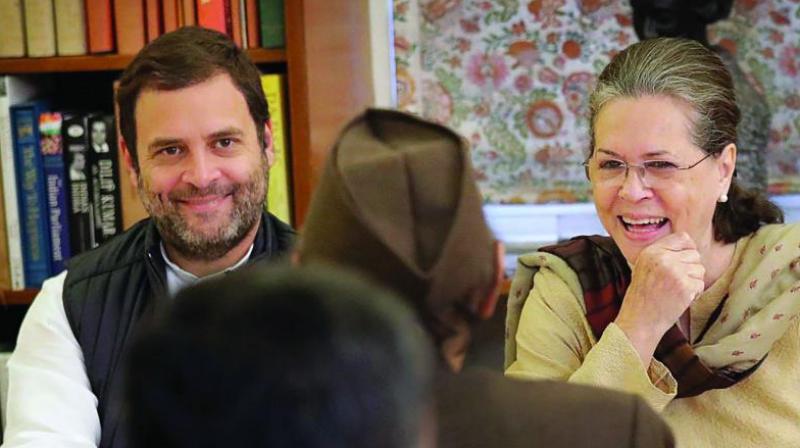 New Delhi: Former Congress chief Sonia Gandhi on Thursday said that her son Rahul Gandhi, who was elevated to the post of party chief in December 2017, is now her boss too.

"We have a new Congress president and on your behalf and my own I wish him all the best. He is now my boss too. Let there be no doubt about that," Sonia said in Congress Parliamentary Party meeting.

On December 16, 2017, Rahul took over the baton of the grand old party, Congress, from his mother Sonia Gandhi who was holding the post for 19 years.

Addressing the Congress Parliamentary Party meeting in Delhi, Sonia said, “I know that all of you (party leaders) will work with him with the same dedication, loyalty and enthusiasm as you did with me."

However, while stressing that her son was in-charge, Sonia made it clear that she would take the lead in rallying other parties against the BJP.

"As for myself, as Chairperson of the Congress Parliamentary Party, I will work with the Congress President and other colleagues in discussions with like-minded, political parties to ensure that in the next election, the BJP is defeated and India is restored to a democratic, inclusive, secular, tolerant and economically progressive path," Sonia said.

Former Congress chief further said that all the like-minded parties need to work together and ensure that the ruling BJP is defeated in the upcoming Lok Sabha elections. She added that there was a need to “restore India” to its democratic, inclusive and secular path.

“An all-pervasive atmosphere of fear and intimidation has been created. Liberal, secular and democratic traditions are being wantonly damaged. The pluralistic nature of our society -- which has been its strength for centuries --is being eroded,” Sonia said, adding that institutions were being ‘destroyed’.

She also urged the Congress party to gear up for the general elections, which, she said, are due in slightly over a year and "might well be called earlier as they were in 2004".

Describing the Congress' debacle in the 2014 general election as a severe setback, Sonia said she was convinced that it was an aberration.

"Increasingly, the people of our country, people belonging to all sections of our society-are getting disillusioned with the present regime. It is for us to channel this discontent into support."

Lauding the achievements of Congress, Sonia said, "We performed very creditably under tough circumstances in Gujarat and recent by-election results in Rajasthan were huge. This shows winds of change are coming. I am sure Karnataka too will underline resurgence of Congress."

Attacking the BJP-led National Democratic Alliance (NDA) at the Centre, former Congress chief said, "It has been almost four years since this government (BJP) came to power, this has been a period in which institutions which have come under systematic assault-Parliament itself, judiciary, media and civil society."

"Investigative agencies have been let loose against political opponents," she added.

Sonia also said that while the NDA government promised a government under the theme ‘maximum governance, minimum government, they failed to deliver and their only skills appear to be those in marketing of existing UPA schemes.

“This government announces what it calls new programmes and initiatives ever so often, unveiling them with the flourish of a magician. In reality, they are simply recycled schemes that were launched during the UPA government. True, the new names are catchy and colourful, perhaps much more so than during our time, we must admit. But this seems to be a game of Maximum Publicity, Minimum Government, or put another way, Maximum Marketing, Minimum Delivery. If this government is to be believed, India had accomplished nothing before May 2014.”

Reacting on Prime Minister Narendra Modi's attack on Congress in his speech in Parliament on Wednesday, Sonia Gandhi said, "Tall claims are being made of so-called economic achievements, but the reality is quite different."

She said rural economy and small and medium enterprises were in a shambles and joblessness had increased. "The last budget is full of sleights of hand - of jumlas," she added.

Sonia also questioned the Centre’s policy on Jammu and Kashmir saying violence continued in the Valley and there was little being done to boost development.

“We must combat cross-border terrorism forcefully - on that there can be no compromise. We salute our jawans who are bearing the brunt. Our hearts go out to the families of those who have laid down their lives for our country. Side-by-side, we must also ask, where is the healing touch, where is the developmental thrust, where is the political engagement that was so much in evidence when Dr Manmohan Singh was Prime Minister?,” she said.